© UNICEF/Alexsey Filippov
On 5 March 2022, a girl looks out from a window as she waits inside an evacuation train to Przemysl in Poland, at Lviv train station, western Ukraine.

“The response by Europe has been remarkable,” Filippo Grandi said in a statement on Tuesday, while urging other nations to step up.

At the Polish/Ukrainian border I was impressed by the outpouring of solidarity by communities through Poland in support of refugees: many volunteers in action, and piles of donations everywhere, all effectively organized by border guards and local authorities. pic.twitter.com/QRW5rwXdV7

He added that a European Union (EU) temporary protection directive, announced last Thursday, “offers the refugees security and options, a chance for stability during a time of great upheaval.”

Mr. Grandi, head of the UN refugee agency, UNHCR, spent five days in the region where he met with refugees, humanitarian workers, local responders and governments.

Though heartened by the European response, he remains deeply saddened for Ukraine and its people.

“At the borders I saw an exodus of people, mostly women and children, along with older refugees and people with disabilities. They arrived shocked and deeply impacted by the violence and their arduous journeys to safety. Families have been senselessly ripped apart. Tragically, unless the war is stopped, the same will be true for many more,” he said.

Ukrainians have been streaming into neighbouring countries since the start of the Russian invasion on 24 February.

The majority, more than 1.2 million, have headed to Poland.  Others have crossed into Hungary, Moldova, Romania, Slovakia and beyond.

His staff have been ramping up operations to meet ever increasing needs.

Mr. Grandi reported that UNHCR is supporting coordination of the humanitarian response.  “Scores of experts and tens of millions of dollars of aid” have also been deployed to support governments with providing material and cash assistance, while protection teams have been reinforced to address the needs of women and children.

© IFRC/Arie Kievit
People who fled Ukraine, in a temporary shelter near Lublin.

The UN refugee chief however called for the international community to step up to provide more support for refugees and host communities, particularly in Moldova.  Some 250,000 people have found refuge there.

“All European states must continue to show generosity. Other countries, beyond Europe, also have an important role to play to help people in need and share the international responsibility for millions of refugees,” said Mr. Grandi.

While in the region, the UN refugee chief also raised concerns about discrimination and racism against some communities fleeing Ukraine. Authorities have assured him that they will not discriminate or turn away people escaping to safety.

Meanwhile, the situation inside Ukraine remains shocking, as people seek to shelter from the fighting in any way they can.

As of Monday, some 1,335 casualties were recorded, including 474 deaths, according to the UN human rights office, OHCHR, though real figures are believed to be considerably higher.

UN Spokesperson Stéphane Dujarric said on Tuesday that UN teams and open sources both reported heavy fighting in the east and northeast, including in and around Mariupol, Chuhuiv, Kharkiv, Izyum, Chernihiv, Sumy and Sievierodonetsk.

Extremely violent clashes were also reported in the north, on the outskirts of the capital Kyiv, including Bucha, Hostomel and Irpin.

People trapped in some of these areas lack access to supplies, said Mr. Dujarric, speaking during his daily briefing in New York.

“We welcome public communications by the two sides regarding their intention to facilitate safe passage for civilians out of conflict areas including Mariupol, Kharkiv and Sumy,” he told journalists.

Humanitarians are scaling up response in the east and west, as security allows.

UN partner the International Committee of the Red Cross has provided more than 200,000 medical items to mobile clinics, while Médecins Sans Frontières (MSF) has delivered roughly 120 cubic metres of medical supplies to the country.

He added that humanitarians have established a common operations coordination centre in Rzeszow, Poland, for all organizations responding to the crisis in Ukraine and neighbouring countries.

In its latest update, the International Atomic Energy Agency (IAEA) continues to express concern about the Chernobyl Nuclear Power Plant, site of the devastating 1986 accident, and the “stressful situation” facing its staff who have been, in effect, confined there.

Roughly 210 technical personnel and guards on the site, have been working ever since the invading Russian forces took control of the facility almost two weeks ago.

IAEA chief Rafael Mariano Grossi said Ukrainian regulatory authorities informed the agency that it was becoming increasing urgent and important for staff to be rotated.

They have asked the IAEA “to lead the international support needed to prepare a plan for replacing the current personnel and for providing the facility with an effective rotation system.”

Mr. Grossi underlined that staff operating nuclear facilities must be able to rest and work in regular shifts.

He again expressed readiness to travel to the Chernobyl plant, or elsewhere, in efforts to help protect the country’s nuclear facilities. 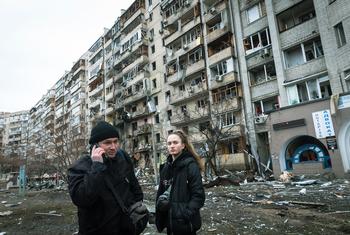 On day 13 of Russia’s invasion of Ukraine, and amid rising numbers of civilian casualties, UN rights chief Michelle Bachelet on Tuesday repeated her ceasefire call, with humanitarians on the ground describing conditions as increasingly “apocalyptic”.