© WFP/Marco Frattini
A cargo of high energy biscuits for Ukrainian refugees is offloaded at an airport in Poland.

Amid reports of dwindling food supplies in embattled areas in Ukraine, the World Food Programme (WFP) on Friday began ramping up operations, warning that the conflict could have consequences beyond the country.

Ukraine has long been the “breadbasket” of Europe, but the fighting could disrupt global wheat trade, with knock-on impacts on food prices and overall food security.

#HappeningNow for the people of #Ukraine: massive @WFP scale-up in action. When you're ramping up to feed 3-5 million people, it takes LOTS of food being purchased inside/outside the country, LOTS of convoys rolling & LOTS of cash assistance given to families who need it! 🇺🇦 pic.twitter.com/qGcl2N4NyK

“The bullets and bombs in Ukraine could take the global hunger crisis to levels beyond anything we’ve seen before,” WFP David Beasley said during a visit to one of its hubs on the Polish-Ukrainian border.

The UN agency has been setting up hubs to facilitate delivery of food assistance into Ukraine and assist refugees streaming over the borders.

Over two million people have been displaced since the start of the conflict eight days ago, according to UN estimates. Roughly half fled the country, including some 500,000 children.

“I want to return to my home, I want peace everywhere and I don’t want this war to continue,” said Ljudmila, a Ukranian refugee, who spoke to WFP at the Korczowa-Krakovets border crossing.

For WFP, the immediate priority is to establish a “food lifeline” into hotspots in Ukraine, such as the capital, Kyiv.  Reports are emerging of severe shortages of food and water there, and in the northeastern city of Kharkiv.

Agency staff are in a race against time to pre-position food in areas where fighting is expected to flare.

WFP is locating partners in Ukraine to help it distribute assistance and teams in neighbouring countries are identifying local vendors in order to purchase more stock.

Amid a shortage of cash in Ukraine, WFP plans to provide assistance to families through food distributions, cash, and food vouchers that can be spent in selected shops.

The Russian Federation and Ukraine are responsible for roughly 30 per cent of the global wheat trade. WFP fears any serious disruption of production and exports could push food prices even higher, affecting millions of people.

“This is not just a crisis inside Ukraine. This is going to affect supply chains, and particularly the cost of food,” said Mr. Beasley.

Before the conflict, WFP was purchasing around 50 per cent of its wheat from Ukraine,  to feed hungry people in countries such as Yemen, Ethiopia and Syria.

WFP is calling for “a step-change” in support as the world faces unprecedented hunger due to conflict, climate shocks, and the fallouts from the COVID-19 pandemic. 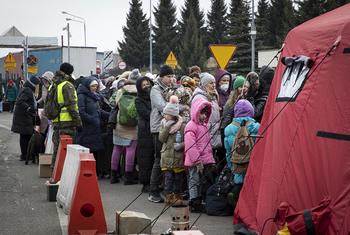 UN humanitarians on Friday described as “unprecedented,” the continuing outflow of children and families fleeing the “relentless shelling” of Russian military action in Ukraine – as they await assurances for the safe passage of relief teams to provide urgently needed assistance.