Thirty-two countries voted in favour of the resolution, which was presented by Ukraine.  Russia and Eritrea voted against it, while 13 nations abstained.

#HRC49 | The @UN🇺🇳 Human Rights Council adopted a resolution calling for the "swift and verifiable" withdrawal of #Russian🇷🇺 troops and Russian-backed armed groups from the entire territory of #Ukraine🇺🇦.Watch the video of the adoption of the VOTE⤵️ pic.twitter.com/hrWtaGeHHn

Council Members observed a minute of silence to honour the victims of the bloodshed.

The resolution calls for the “swift and verifiable” withdrawal of Russian troops and Russian-backed armed groups from Ukraine and urges safe and unhindered humanitarian access to people in need.

The independent international Commission of Inquiry will have a mandate that includes investigating all alleged rights violations and abuses, and related crimes, and making recommendations on accountability measures.

The vote capped two days of discussions on Ukraine in the Council, which is holding its annual month-long session.

Ambassador Yevheniia Filipenko explained the serious motive behind the urgent debate her country had called on the “Situation of human rights in Ukraine stemming from the Russian aggression”.

“Most importantly, the initiative envisages the establishment of a Commission of Inquiry which will investigate all alleged violations and abuses of human rights and violations of international humanitarian law and related crimes in the context of the Russian Federation's aggression against Ukraine, including their root causes,” she said.

“It is our common duty to ensure accountability by mandating the documentation and verification of Russia's crimes and identification of those responsible,” Ms. Filipenko continued, in reference to the Commission of Inquiry. “This is the only way to ensure that such blatant dereliction of human rights values, which we deeply share cherish, will never repeat itself in any place of the world.”

Speaking ahead of the vote, she called on those present to observe a moment of silence for all victims in Ukraine “stemming from the Russian aggression,” at which point the work of the Council paused, as Members stood to show their respect.

“We just held a minute of silence, and we do not oppose such a minute of silence,” said Counsellor Evgeny Ustinov from the Russian delegation. “But we hope that all those present here, including the diplomats and UN representatives, will finally recall those thousands of people who have been killed and maimed by the authorities in Ukraine. And these are the people in Donbass.”

Rejecting the creation of a Commission of Inquiry, Mr. Ustinov insisted that it was “a mere waste of resources, which could better be used to help civilians in Ukraine. However, this will unlikely be a concern of the co-sponsors of the resolution, which will use any means in order to blame Russia for the event.” 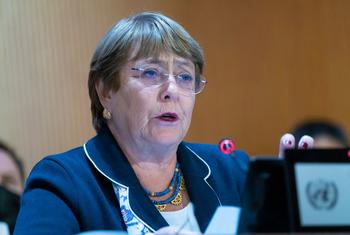