The “senseless war” in Ukraine has forced one million people to flee the country in just seven days, while countless others have been displaced within its borders, UN High Commissioner for Refugees Filippo Grandi said on Thursday.

“I have worked in refugee emergencies for almost 40 years, and rarely have I seen an exodus as rapid as this one,” he remarked.

Unless there is an immediate end to the conflict, millions more are likely to be forced to flee Ukraine. https://t.co/0WmCxgT4QB pic.twitter.com/dVrtF0kCy0

“And unless there is an immediate end to the conflict, millions more are likely to be forced to flee Ukraine.”

Mr. Grandi reported that staff from the UN refugee agency, UNHCR, remain in Ukraine, along with other humanitarians, working where and when they can in frightening conditions.

“Our staff stay, even at great risk, because we know the needs in the country are huge,” he said.

Teams are also working throughout the region to scale-up protection and assistance programmes for the refugees, in support of host governments.

Most of the refugees have headed to Poland and other neighbouring countries such as Hungary, Moldova, Romania and Slovakia.

A UNHCR data portal, unveiled on Wednesday, is keeping track of arrivals.

Mr. Grandi commended regional governments and local communities that have taken in refugees, though stressing that ending the conflict is the only solution.

“International solidarity has been heartwarming,” he said. “But nothing – nothing – can replace the need for the guns to be silenced; for dialogue and diplomacy to succeed. Peace is the only way to halt this tragedy.”

Among the masses leaving Ukraine are people from dozens of other countries, including migrant workers and students.

Some have encountered challenges as they attempt to escape conflict-affected areas, cross borders, or seek life-saving assistance.

The head of the International Organization for Migration (IOM) was alarmed by verified credible reports of discrimination, violence and xenophobia against third country nationals.

“Let me be clear, discrimination on the basis of race, ethnicity, nationality or migration status is unacceptable,” said IOM Director General, António Vitorino.

He stressed that neighbouring countries must allow all people fleeing Ukraine to access their territory, while assistance and protection must be provided in a manner that is non-discriminatory and culturally appropriate.

1 million refugees have fled Ukraine in a week

Independent UN human rights experts have also weighed in on the issue, citing reports by individuals and the media about discrimination against African students and their dependents.

“Measures that differentiate between people, on any ground, especially on the basis of race or ethnicity, are not only legally unjustifiable but morally and ethically repugnant as we embrace our common humanity and fight for fundamental freedoms,” the Working Group of Experts on People of African Descent said in a statement.

The members of the Working Group operate in their individual capacity, and are neither UN staff nor do they receive a salary from the Organization.

They were appointed by the UN Human Rights Council in Geneva, which began its annual month-long session this week.   On Thursday, the Council held an urgent debate on the situation in Ukraine.

Nearly 250 people have been killed since the start of the Russian onslaught on 24 February, the UN human rights office, OHCHR, reported on Thursday.

The victims include 31 men, 27 women, six boys and three girls, as well as 174 adults and eight children whose sex is yet unknown. Meanwhile, 553 people have been injured.

OHCHR believes that real figures are considerably higher, especially in Government-controlled territory and particularly in recent days, due to delays in information from areas where intense fighting is taking place.

The UN office added that Ukraine’s Ministry of Health has reported 352 persons killed, and more than 1,680 injured.

© UNICEF/Victor Kovalchuk/UNIAN
On 25 February 2022, people shelter in a school during ongoing military operations in Kyiv, Ukraine.

As needs continue to grow in Ukraine, the UN and partners are scaling up assistance to people who have fled across borders as well as those who remain inside the country.

Humanitarian agencies were already present in Ukraine, where Government forces and separatists have been battling in the east since 2014.  They were reaching more than 1.5 million people prior to the current crisis.

Osnat Lubrani, UN Resident and Humanitarian Coordinator, said programmes will be expanded, while new operations will be established wherever required across the country.

She stressed that warring parties must ensure unimpeded access to people in need.

“As anywhere in the world, the work of UN teams and our humanitarian partners is always neutral, impartial and independent: we are here to help the most vulnerable civilians, whoever and wherever they are,” she said.

The head of the International Labour Organization (ILO), Guy Ryder, has highlighted the need to support Ukraine’s workers.

He joined the UN General Assembly, which, on Wednesday, adopted a resolution condemning the Russian military offensive in the country.

“Those responsible for the aggression know full well that among its first victims will be working people and that the devastation of jobs, enterprises and livelihoods will be massive and endure for many years,” said Mr. Ryder.

He underscored the agency’s duty “to stand in solidarity with the government, workers, and employers of Ukraine and to join with the rest of the United Nations system in providing all possible assistance to them.”

Moldova: ‘A small country with a big heart’ 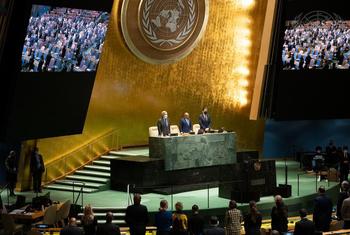 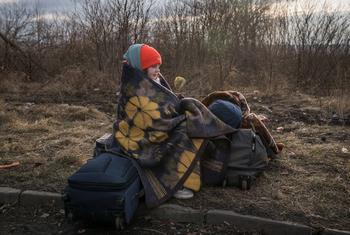 The number of people fleeing the Russian onslaught in Ukraine surpassed 874,000 as of Wednesday morning New York time, data from the UN refugee agency, UNHCR, has revealed.