The answers to some of the world’s most pressing problems are rooted in human rights, UN Secretary-General António Guterres affirmed on Monday.

In a video message to the UN Human Rights Council in Geneva, Mr. Guterres said that although rights “are under assault everywhere”, people are “hard-wired” to claim them.

Human rights cannot be confiscated by dictators or erased by poverty. They are inescapable – and powerful.The @UN works every day, everywhere, to uphold and promote human rights for all.

“Human rights cannot be confiscated by dictators or erased by poverty.   Nor are they a luxury that can be left for later. They are inescapable – and powerful,” he said, addressing the Council’s annual session.

When he presented his priorities for the year to the UN General Assembly last month, the Secretary-General  warned against what he called the “5-alarm global fire” threatening the international community.

“The solutions to these crises are all rooted in human rights,” he told the Council.

On the pandemic, he pointed to the persistent vaccine inequity, which has seen richer countries administering 13 times more doses per person than poorer nations.

“Vaccine inequality demonstrates an utter disregard for the human rights of entire countries and regions,” the UN chief said.

He again appealed for governments, pharmaceutical companies, and partners, to urgently support the global strategy to vaccinate 70 per cent of people in all countries, as outlined by the World Health Organization (WHO).

The pandemic continues to push millions worldwide into hunger and poverty, thus undermining economic and social rights, Mr. Guterres continued. It has also been used as a pretext for curbing civil and political rights.

“We can best address these human-rights abuses by centering our response around rights themselves — an approach set out in my Call to Action on Human Rights, the 2030 Agenda and the Sustainable Development Goals,” he said.

Unequal recovery from the pandemic has exposed what Mr. Guterres described as “the moral bankruptcy” of the global financial system.

“The pandemic has squeezed developing economies dry. Many face debt defaults. Few will be able to invest in a strong and sustainable recovery,” he said.

With millions of children out of school, education has become “a crisis within a crisis,” and another reason why the international community needs “a New Global Deal” that ensures power, wealth and opportunities are shared more fairly.

This renewed social contract will be essential to tackle poverty and hunger, invest in education, and rebuild trust and social cohesion.  He stressed that the rights of women and girls must be at the forefront.

“The recovery is an opportunity for targeted investments in women’s education, employment, training and decent work, to make up ground lost during the pandemic,” he added.

Regarding the climate crisis, Mr. Guterres acknowledged the latest report from the Intergovernmental Panel on Climate Change (IPCC) on adaptation, issued the same day, describing it as “another death knell for the world we know.”

He said the triple planetary emergency of climate change, pollution and nature loss, is a threat to all human rights.

The Secretary-General expressed solidarity with young people, women and girls, small island states and indigenous communities who are leading the fight back.

He also welcomed the Council’s recognition of the right to a healthy environment, which he called “an important tool for accountability and climate justice.”

Turning to digital technology, Mr. Guterres decried the “Wild West for human rights” characterized by the digital divide, internet shutdowns, disinformation campaigns, and proliferation of spyware and other tools.

Mr. Guterres said the internet must be treated as a global public good that benefits everyone, everywhere.

“We need a digital public square that is inclusive and safe for all; and social media platforms that support human rights and freedoms,” he underscored.

© UNICEF/Victor Kovalchuk/UNIAN
On 25 February 2022, people shelter in a school during ongoing military operations in Kyiv, Ukraine.

For his final point, Mr. Guterres spoke of how the expansion of violence and conflict denies the human rights of millions of people.

“We know the inevitable result of war: civilian casualties; women, children and men forced from their homes: hunger, poverty and huge economic disruption.  Conflict is the utter negation of human rights across the board,” he said.

“I have consistently called for the end of the offensive and return to the path of dialogue and diplomacy,” he said.  “We must show all people in Ukraine that we stand by them in their time of need.”

On Thursday, the UN Human Rights Council will hold an urgent debate on the situation in Ukraine. 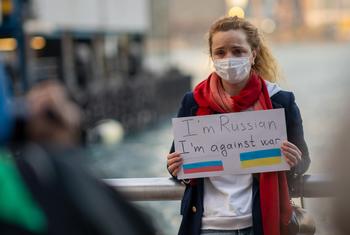 The scheduled work of the UN Human Rights Council was halted temporarily on Monday as Member States were called to vote on a request from Ukraine to hold an urgent debate on the matter and to condemn Russia’s military operation.