© UNICEF/Wathiq Khuzaie
A young girl looks through a hole in the wall from damage from conflict in a school in Ramadi, Anbar Governorate, Iraq. (file)

Political leaders in Iraq must urgently overcome their divisions and work for the good of the people, the top UN official in the country told the Security Council on Thursday.

.@JeanineHennis: priority should be to urgently agree on a programme of action that – immediately and meaningfully – tackles Iraq’s long list of outstanding domestic business. It is high time to return the spotlight where it deserves to be: on the people of #Iraq.

This prolonged phase could be forgiven “if we were witnessing vibrant exchanges on policy orientations, on development pathways and economic reform plans,” she said.

“However, so far, we are observing quite the opposite: hampering the change and reforms the country so desperately needs.”

Ms. Hennis-Plasschaert added that as the “political impasse” continues, “precious time” is passing by.

“Behind the headline debate of a majority vs. consensus government, many Iraqis increasingly wonder whether the national interest is actually ‘front and centre’ in the ongoing negotiations - rather than access to resources and power, or how the pie of political appointments and ministries will be carved this time around.”

Ms. Hennis-Plasschaert, who also heads the UN mission in the country, UNAMI, updated  ambassadors on recent developments since the October 2021 vote to decide the Council of Representatives, Iraq’s 329-seat parliament, which in turn elects the President and confirms the Prime Minister.

Members met for the first time last month and elected a Speaker and two deputies.  However, they failed to reach a quorum for the 7 February session to elect a President.

While the nomination period was re-opened for another three days, the Federal Supreme Court ruled in the interim that one candidate, former Foreign Minister Hoshyar Zebari, is ineligible.

Ms. Hennis-Plasschaert explained that once elected, the President will have 15 days to charge the Prime Minister-designate, the nominee of the largest parliamentary bloc, to form a Council of Ministers.

“Well clearly, the current situation suggests that we’re not there yet,” she remarked.

With the election long over, the UN envoy stressed that tackling the “long list of outstanding domestic business” must be prioritized.

UN Photo/Loey Felipe
Jeanine Hennis-Plasschaert, Special Representative of the Secretary-General and Head of the UN Assistance Mission for Iraq, briefs the Security Council on the situation in the country.

Dangers of a ‘weak home front’

Leaders also must focus on the people of Iraq, whose needs include gainful employment opportunities, safety and security, adequate public service delivery, justice, and meaningful participation of women and youth.

“Moreover, and as I’ve pointed out countless times, a weak home front creates vulnerabilities. To Da’esh for instance, ready to take advantage of any political and security vacuum. But also to continued external interference. In the case of Iraq, not a hypothetical point,” she said.

With people’s patience wearing thin, the UN envoy warned of the potential consequences, recalling the October 2019 demonstrations against the lack of social, economic and political prospects.

“We know how that ended. Hundreds killed; thousands injured. The very least Iraqis may expect now is a sense of urgency from their elected representatives,” she said.

“It is urgent for Iraq’s political leaders to overcome divisions, to put aside partisanship and to bury personal vendettas.” 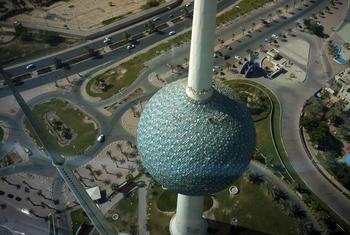 More than 30 years after the UN Compensation Commission (UNCC) was created to ensure restitution for Kuwait following the Iraqi invasion of 1990, the reparations body announced on Wednesday that it had processed its final claim, amounting to $52.4 billion in total.