UN-appointed independent rights experts issued a statement on Monday calling on India to end relentless misogynistic and sectarian attacks against an investigative journalist.

The appeal from Special Rapporteurs on the right to freedom of opinion and expression, Irene Khan and situation of human rights defenders, Mary Lawlor follows what they have called “relentless misogynistic and sectarian attacks” against Rana Ayyub – including death and rape threats.

🇮🇳#India: Relentless misogynistic and sectarian attacks online against journalist #RanaAyyub must be promptly and thoroughly investigated by the Indian authorities and the judicial harassment against her brought to an end at once – UN human rights experts.https://t.co/RW68cLVbt9 pic.twitter.com/FeWRZqvwzj

They pointed to the attacks as resulting from Ms. Ayyub’s reporting on issues affecting minority Muslims in the country, her criticism of the Government for its handling of the pandemic, and comments that she made on a recent ban on hijabs at schools and colleges in Karnataka state.

“In response to Ms. Ayyub’s efforts to shine a light on public interest issues and hold power to account through her reporting, she has been maliciously targeted with anonymous death and rape threats by organised groups online,” said the experts.

“The lack of condemnation and proper investigation by the Government, coupled with the legal harassment it has itself inflicted on Ms. Ayyub, has only served to falsely legitimise the attacks and attackers and further endangered her safety.”

For a number of years, the Indian authorities have been trageting Ms. Ayyub with various forms of harassment, the independent experts stated.

On 11 February, for the second time in six months, the journalist’s bank account and other assets were frozen in response to seemingly baseless allegations of money laundering and tax fraud related to her crowd-funding campaigns to provide assistance to those affected by the pandemic.

As with many of the false and defamatory accusations made against Ms. Ayyub in retaliation for her reporting, the experts said, the bogus allegations can be traced back to a far-right social media group.

Previously, UN human rights experts had written to the Indian Government on a number of occasions to express their concerns over threats against and harassment of the journalist.

“The Government is not only failing in its obligation to protect Ms. Ayyub as a journalist, but through its own investigations of Ms. Ayyub, it is also contributing to and exacerbating her perilous situation”, the Special Rapporteurs said.

“It is imperative that the authorities take urgent measures to protect her from the onslaught of threats and hate online and end the investigation against her.” 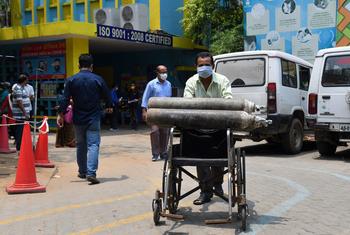 Scenes of relatives desperately trying to find oxygen supplies for hospitalized COVID-19 patients in India last year, alerted the world to an acute, deadly problem. Yet that was not this first time the country’s hospitals have been hit by a shortage of the life-saving gas, prompting the question of whether there will be enough supplies, when the next major health crisis hits.