More than 30 years after the UN Compensation Commission (UNCC) was created to ensure restitution for Kuwait following the Iraqi invasion of 1990, the reparations body announced on Wednesday that it had processed its final claim, amounting to $52.4 billion in total.

Around 1.5 million successful claims were awarded, out of a total of around 2.7 million lodged with the Commission. If all the claims had been found legitimate, that would have meant a total pay-out of $352.5 billion.

With the final payment made on 13 January, all compensation has now been paid in full, the UN Office at Geneva said in a press release.

Today @UNGeneva hosted a session of the @UN Compensation Commission, marking the conclusion of its mandate which started in 1991. This momentous occasion reflected on the completion of the payment of all compensation awards amounting to $52.4 billion. https://t.co/hR8yPEnJcS pic.twitter.com/Bs8tJ2JpvY

The UNCC’s Governing Council convened a special session to mark the conclusion of the reparations process, ending the process for the individuals, companies and governments, able to prove they had suffered damages from Iraq’s unlawful invasion and occupation of Kuwait, under former dictator Saddam Hussein.

Delegations from Iraq and Kuwait addressed the session during the opening plenary meeting, which was held under the Presidency of Ireland.

Almost 31 years ago, the Commission was established in Geneva – as a subsidiary organ of the Security Council under its resolution 687 (1991) – to process claims and pay compensation for losses and damages suffered as a direct result of the Gulf War from 1990 to 1991.

The $52.4 billion that has gone to successful plaintiffs, was paid out from the UN Compensation Fund, which received a percentage of the proceeds generated over the years by the export sales of Iraqi petroleum and petroleum products.

This percentage, originally set at 30 per cent, was reduced over time under various Security Council resolutions and Governing Council decisions.

Most recently, under Governing Council decision 276 (2017), it was set at three per cent.

During the special session, the Governing Council adopted decision 277 (2022) declaring that the Government of Iraq had fulfilled its international obligations to compensate all successful claimants for the losses and damages they suffered as a direct result of Iraq’s unlawful invasion of Kuwait.

In adopting the decision, UNCC recognized and thanked Iraq for its cooperation with the Commission and commitment in meeting its obligations, despite extraordinary security and economic challenges.

It also thanked the Government of Kuwait for supporting and cooperating with the Commission.

Later this month, the UNCC President will present the final report of the Governing Council on the Commission’s work to the UN Security Council in New York.

UN's Iraq-Kuwait mission promotes calm and should be maintained - report 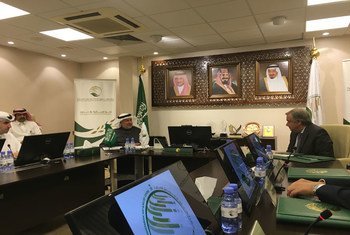 The United Nations Secretary-General has welcomed the al Ula declaration on “solidarity and stability”, announced at the Gulf Cooperation Council (GCC) Summit on Tuesday, aimed at strengthening peace and prosperity in the region.