© UNMVC/Jennifer Moreno
A woman paints a mural for Peace and Reconciliation in Colombia.

Five years after its signing, the Final Peace Agreement in Colombia is setting down ever deeper roots, the Special Representative for the country told the Security Council on Thursday, as he called on the Government, political parties, former combatants and Colombians across the diverse South American nation, to intensify implementation of the landmark 2016 accord ahead of Congressional elections.

Carlos Ruiz Massieu, who is also the Head of the UN Verification Mission in Colombia, said the elections, slated for March, will include for the first time representatives from 16 “special transitional electoral districts for peace”, which were established in 2021 and stipulated under the 2016 agreement to promote participation of historically excluded populations in conflict-affected areas.

"Political reintegration is at the core of the peace process," said Special Representative @CGRuizMassieu in his Security Council briefing, calling on the authorities to ensure political rights and protection of all men and women ahead of the upcoming Congressional elections. https://t.co/15QGDfEPj4

A voice for the marginalized

Against that backdrop, he said more than 400 candidates are running to make the voices of regions historically affected by poverty and conflict heard.

All of them are recognized as victims of Colombia’s five-decade long conflict, half of them are women and many are indigenous and Afro-Colombians.  “This is an historic opportunity, envisioned in the Agreement, that must be protected in order to widen Colombia’s democracy,” he observed.

No excuse for violence

Presenting the Secretary-General’s report (document S/2022/1090), he highlighted gains made in the reintegration of 13,000 ex combatants.

While he acknowledged a reduction in the number of killings compared to 2021, he stressed that every effort must be made to enhance their individual security, noting that the actions of illegal armed groups and criminal groups are being felt, particularly in regions given priority for implementation of the Peace Agreement.  “In today’s Colombia, there can be no justification for violence,” he said.

On that point, Luz Marina Giraldo, Former combatant with the Revolutionary Armed Forces of Colombia (FARC-EP), signatory to the Final Agreement and now leader in reintegration initiatives, described a general rejection of former combatants, as well as their children, by many in Colombian society.

She said stigmatization, polarization and discrimination have prevented the fulfilment of those goals enshrined in the peace deal.

Underlining the repeated use of the words, “family” and “security” in that document, she said its territorial focus should allow former combatants, war widows and orphaned children, to live safely throughout the country and protect them from discrimination.

“Today, I ask this Council, from the bottom of our souls, not to leave us alone,” she said.

© UNMVC/Héctor Latorre
Former FARC combatants participate in a project for demining in Colombia.

Emilio José Archila, Presidential Advisor for Stabilization and Consolidation of Colombia, pointed to Ms. Marina’s success as representative of the reintegration process.

Noting that she was in prison when it began and has since left, he said all those involved in the process are supported by lawyers financed by the Government.

Seventy-seven per cent are in job training programmes and 88 per cent are in the health and pension systems.  “There is no other area of Colombia that has those levels of social coverage,” he assured.

On the political front, he said members of the Comunes party - formerly the FARC party, formed following the demobilization of the group with the same name - have tabled various bills and local elections have been held in the most peaceful manner in 70 years.

Thanks to special protection provided to Comunes party members, none were injured or forced to withdraw.  “The safety of former combat and their families has always been a priority,” he said.

On the security front, he denounced recent attacks in Arauca and in Cali, by the National Liberation Army (ELN), which clearly demonstrate a lack of will to enter into any dialogue process.

A bet on peace

Going forward, he said Colombia will continue to comply with what was agreed through its “peace with legality” policy, highlighting the President’s belief in the unique opportunity to resolve difficulties, that should have been confronted decades ago.

Implementation is planned over 15 years, meaning that the next three administrations are duty bound to follow this path.

“Colombia placed a bet on peace,” he declared.  It is showing the world that conflict can be resolved through political determination, strict planning and a focus on results, he added. 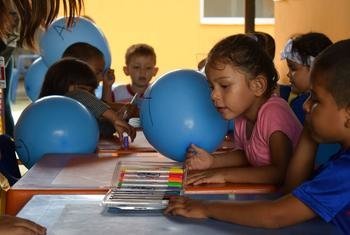