© UNICEF/Shehzad Noorani
A nine-year-old girl pushes a wheelbarrow loaded with water-filled jerrycans in a IDP camp in Darfur, Sudan.

Delivering the ICC’s 34th report on Darfur to the Council, he emphasized the critical need for cooperation and concrete action, both by the authorities in Khartoum and the international community.

Mr. Khan travelled to the Sudanese capital last August, just two months after taking up his appointment, where he met with Darfur survivors, civil society and the government.

We must do better

“I share the frustrations, the impatience, and the hopes of those survivors that that singular moment - the first referral by the Council to the International Criminal Court - will reap dividends,” he said.

“But it is important, as I said in my interactions with Sudanese government members, that this referral cannot be a never-ending story,” he added.  “We need collectively to do better - my Office, of course, but also this Council - to make sure the promise and the purpose of the referral is wedded with concrete action.”

The Darfur conflict began in 2003 between Sudanese Government forces, backed by allied militia known as Janjaweed, and Darfur rebel movements. Hundreds of thousands were killed, while scores more were displaced.

In 2005, the Council referred the case to the ICC, which is investigating allegations of genocide, war crimes and crimes against humanity.

Mr. Khan reported on progress, notably the start in April of a trial against a “notorious” Janjaweed leader, Ali Muhammad Ali Abd-Al-Rahman, known as “Ali Kushayb”.

The other warrants are for the former Interior Minister, Abdel Raheem Muhammad Hussein; the former governor of South Kordofan state, Ahmed Harun, and Abdallah Banda, former commander of the Justice and Equality Movement (JEM).

Mr. Khan stressed that the cases before the ICC “are not against Sudan” but “against individuals for whom the evidence discloses their responsibility in relation to crimes within the jurisdiction of the court.”

As with all cases referred to the ICC by the Security Council, Sudan is a priority for Mr. Khan.

Several factors, including non-cooperation by previous regimes, prevented investigators from undertaking field visits to the country over the past 17 years.

As a result, evidence against Mr. Al-Bashir and Mr. Hussein needs strengthening, he said, which requires cooperation and collaboration from the Sudanese authorities, but also the Council and UN Member States.

Mr. Khan spoke about steps he has taken towards greater effectiveness, such as allocating additional investigators, personnel and resources.  He has also appointed renowned human rights lawyer Amal Clooney as a pro bono special adviser.

His visit to Khartoum last August also resulted in the signing of a memorandum of understanding with the government on all four arrest warrant cases, marking a first.

The Sudanese authorities had also committed to work more closely with his Office, and to sign the Rome Statute, the 1998 treaty that established the ICC. Agreement had also been reached to ensure a permanent field presence of the Office of the Prosecutor in Khartoum.

However, the “landscape” in Sudan changed just two months later after the military, which had been sharing power in a transitional government, dissolved civilian rule.

“The hiatus from the 25th of October has meant we have lost focal points. We are trying to catch up,” said Mr. Khan.  “We have had to suspend active investigations, so this was a very troublesome, concerning turn of events.”

There has been an “upside”, he reported, following an ICC team visit to Khartoum in December.  General Abdel Fattah al-Burhan, who led the coup, has reassured that the memorandum of understanding was still valid, and that he was looking at cooperating.

“And he said - on more than one occasion to me directly, and to the team in December - that it was essential to have justice for the victims in Darfur,” Mr. Khan told ambassadors.

“The challenge now collectively for all of us is to make sure those assurances are translated into concrete, tangible partnerships and accountability.” 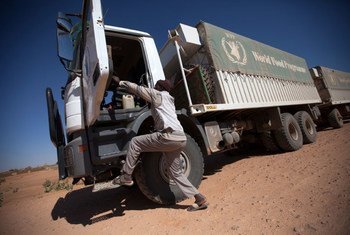 Sudan: Looting in Darfur, leaves 730,000 without enough to eat

The UN chief condemned on Wednesday the looting and attacks against United Nations facilities, equipment and supplies gifted to the Sudanese authorities for civilian in El Fasher, Darfur.