UN Photo/Logan Abassi
UN peacekeepers take a break while working through the rubble of the UN mission in Haiti's headquarters in Port au Prince, in the aftermath of the devastating January 2010 earthquake.

On 12 January 2010, a 7.0 magnitude earthquake struck Haiti, leaving its capital Port-au-Prince devastated. About 220,000 people were reportedly killed, among them, 102 United Nations staff who lost their lives when the building housing the mission there, known as MINUSTAH, collapsed.

Paying tribute to all the victims, the UN in Haiti remembered not only the hundreds of thousands of Haitians who lost their lives 12 years ago, but also the many thousands more who sustained permanent injuries.

At the time, some 300,000 people were injured, and 1.5 million became homeless during the 35-second-long tremor.

Deputy Special Representative of the Secretary General in Haiti, Bruno Lemarquis, took part in a remembrance ceremony on Wednesday, to remember the lives lost.

12 years ago, a devastating earthquake claimed hundreds of thousands of lives in Haiti, including 102 members of the @UN family.Today and every day, we remember the victims &amp; honour their legacy through our work.They will never be forgotten.

The UN system in Haiti honoured those staffers who perished, in a statement released on Wednesday, describing it as “one of the darkest days in its history”.

Since then, “Haiti has drawn on the resilience of its people, the work of its institutions and the assistance of its many friends and supporters to overcome the ravages caused by that calamity”.

Across the UN system, messages of remembrance were shared. UN Secretary-General, António Guterres, said on a tweet that “everyday we remember the victims and honour their legacy through the Organization’s work”. And the Office for the Coordination of Humanitarian Affairs (OCHA), renewed its support for Haiti’s “path to recovery, stability and prosperity”.

Last August, another large earthquake hit the southern regions of the country, killing more than 2,200 and injuring over 12,000 people, and leaving thousands of homes destroyed.

The same sense of resilience and solidarity was again in evidence, as Haitians promptly and effectively responded to yet another disaster.

In the statement issued by the UN office, the Organization renewed its commitment to work alongside the Haitian people, and with the country’s friends and supporters.

The UN is on the ground, continuing to work on long-term reconstruction, helping communities “to build a sustainable, inclusive, and brighter future for Haiti.” 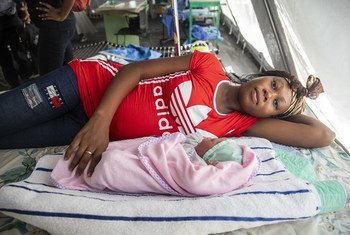 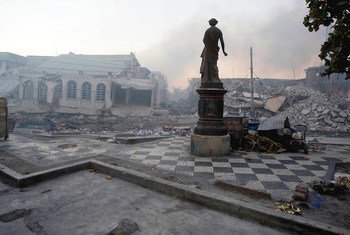 More than 200,000 Haitians who perished in the devastating earthquake which struck the island nation ten years ago, were honoured in a solemn ceremony of remembrance at UN Headquarters in New York on Friday, along with 102 staffers who died – the single greatest loss of life in the Organization’s history.