At least four children have been killed and multiple others have been maimed during an escalation of conflict over the past week in Myanmar, said the United Nations Children’s Fund (UNICEF) on Tuesday.

Last Saturday, the body of a 13-year-old boy was discovered in Matupi, Chin State, while a 12-year-old girl and 16-year-old boy were injured by heavy weaponry in Loikaw, Kayah State, following intense airstrikes and mortar attacks.

On the same day, a 7-year-old girl was injured by heavy weapons fire in Hpa An, Kayin State.

UNICEF condemns the killing of at least four children, and the maiming of multiple others, during an escalation of conflict over the past week in Myanmar. Full statement: https://t.co/jdQ1C442VJ

On 7 January, one 14-year-old and two 17-year-old boys were fatally shot in Dawei Township, in the Tanintharyi Region. And on 5 January, two young girls, aged 1 and 4, were injured by artillery fire in Namkham, Shan State.

In a statement, UNICEF Regional Director, Debora Comini, said the agency was “gravely concerned” by the escalating conflict and condemns the reported use of airstrikes and heavy weaponry in civilian areas.

UNICEF is also particularly outraged over attacks on children that have occurred across the country.

“Parties to conflict must treat the protection of children as a foremost priority and must take all steps necessary to ensure that children are kept away from fighting and that communities are not targeted”, Ms. Comini said.

According to her, this protection is required by international humanitarian law and the Convention on the Rights of the Child, to which Myanmar is a signatory.

Recalling other recent incidents, UNICEF called for urgent action to ensure independent investigations, so that those responsible can be held to account.

Overall, the people of Myanmar are facing an unprecedented political, socioeconomic, human rights and humanitarian crisis with needs escalating dramatically since the military takeover and a severe COVID-19 third wave.

According to a UN Humanitarian Needs Overview published in December by OCHA, the turmoil is projected to have driven almost half the population into poverty heading into 2022, wiping out the impressive gains made since 2005.

The situation has been worsening since the beginning of the year, when the military took over the country, ousting the democratically elected Government. It is now estimated that 14 out of 15 states and regions are within the critical threshold for acute malnutrition.

For the next year, the analysis projects that 14.4 million people will need aid in some form, approximately a quarter of the population. The number includes 6.9 million men, 7.5 million women, and five million children. 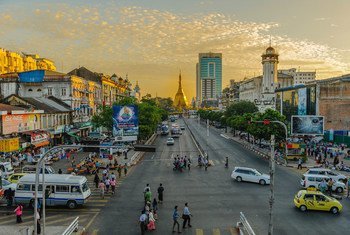 Authorities in Myanmar are being urged to conduct a full investigation into the killing of a journalist last month, reportedly during an army attack in the southeast, the UN’s educational and cultural agency, UNESCO, said on Wednesday.