© UNICEF/Rashad Wajahat Lateef
Thousands of Rohingya have been left homeless after a massive fire broke out in their refugee camp in Cox's Bazar, Bangladesh, burning down 300 shelters and damaging another 500.

Teams from UN migration agency IOM were mobilized on Sunday after fire swept through a refugee camp in Cox’s Bazar, Bangladesh, home to thousands of Rohingya who have fled violence in neighbouring Myanmar.

The blaze was first reported just before 5 pm local time and caused considerable damage to sections of the largest camp of its kind in the world, affecting both refugees and members of the host community.

Response teams were deployed to protect refugees and bring the situation back under control, in coordination with the local authorities and fire brigade.

So far, the cause and origin of the blaze are unknown, and no fatalities have been reported, though two people were reportedly injured.

“We are coordinating with other humanitarian actors to ensure that those affected are provided with food, health, protection, water, sanitation, and hygiene needs,” said Nusrath Ghazzali, officer-in-charge for IOM Bangladesh.

Top priorities include shelter repair and rebuilding, as well as access to cooking facilities.

The World Food Programme (WFP) on Monday reported that it has begun serving hot meals to some 2,200 camp residents.

The agency will distribute hot meals twice daily to all families who now have no means of cooking for themselves.

The incident follows a earlier large fire that broke out on 2 January, which resulted in significant damage to IOM’s Severe Acute Respiratory Infection and Isolation and Treatment Center (SARI ITC).

IOM and humanitarian partners in Cox’s Bazar plan to conduct technical assessments of the damage from Sunday’s fire, and the immediate and longer-term needs of those affected.

A mobile medical team is on the ground providing assistance as needed.  Another team is being deployed within the camp to ensure people have access to accurate and useful information.

IOM has also taken immediate steps to mobilize non-food item kits for affected households.  The kits are being supplemented with blankets, given the current cold dry weather.

Roughly one million Rohingya have fled violence across the border in Myanmar for Bangladesh since the early 1990s.  More than 600,000 are living in a network of camps in Cox’s Bazar, which is located in the southeast of the country. 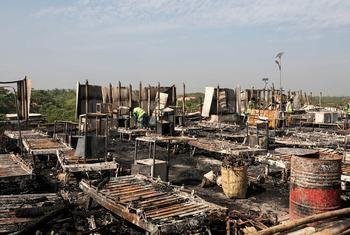 A devastating fire has ripped through a COVID-19 treatment centre for Myanmar refugees sheltering in Bangladesh, UN migration agency (IOM) said on Tuesday.