Guterres calls for end to conflict in Ethiopia after deadly attacks

© UNICEF/Christine Nesbitt
An armoured vehicle is left abandoned on a road in Tigray, Ethiopia, on July 20, 2021.

Guterres calls for end to conflict in Ethiopia after deadly attacks

The Secretary-General, António Guterres, said on Monday he was deeply saddened by reports that more than 50 civilians were killed and injured in an airstrike in northern Ethiopia, last Friday.

The attack reportedly took place in a site hosting internally displaced people in the town of Dedebit, in the Tigray region.

According to Mr. Guterres, the UN and its humanitarian partners are working with authorities to urgently mobilize emergency assistance in the area, despite continuing challenges due to severe shortages of fuel, cash and supplies across Tigray.

The UN Chief is deeply concerned about the impact the conflict continues to have on civilians in Ethiopia.

The Secretary-General reiterates his call for an immediate cessation of hostilities, including airstrikes, and for all parties to adhere to their obligations under international humanitarian law to facilitate humanitarian access and to ensure the protection of civilians, including humanitarian actors, premises, and sites.

In another statement released on Sunday, the United Nations Children’s Fund (UNICEF) expressed outrage at the attacks.

The agency stressed that camps for refugees and internally displaced people, including schools and other essential facilities, are civilian facilities. Failing to respect and protect these areas by combatants, may constitute a violation of international humanitarian law.

According to UNICEF, acts of violence, including grave violations against children, continue to be perpetrated across northern Ethiopia by all parties to the conflict.

It has now been 14 months since clashes erupted between federal Government troops and forces loyal to the Tigrayan People’s Liberation Front.

Renewing its call for an immediate cessation of hostilities, UNICEF urged all parties to build on the initial signs of progress of the past several weeks.

In December, the Ethiopian Government announced that the National Defence Force would pause any further advance, and Tigrayan forces stated they had withdrawn from neighbouring Afar and Amhara regions, back into Tigray.

At the time, UN Secretary-General, António Guterres, urged the warring sides to seize the opportunity to bring an end to more than a year of fighting.

Meanwhile, a wider humanitarian crisis continues to wreak havoc in parts of Ethiopia. Some 5.2 million people currently need help in the northern regions of Tigray, Amhara and Afar.

Amidst allegations of widespread human rights abuses, thousands are feared killed as more than two million have been forced to flee their homes.

And over the past few months, killings, looting and destruction of health centres and farming infrastructure, including irrigation systems that are vital to production, have caused humanitarian needs to surge.

According to UN humanitarians, the situation in the northern part of the country remains unpredictable and volatile. 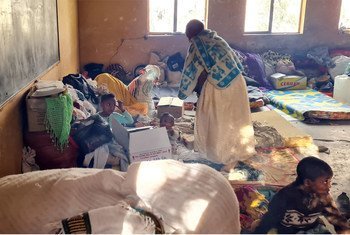 “Refugees are not and should never be a target”, UN High Commissioner for Refugees Filippo Grandi said on Thursday, following reports of a deadly airstrike on the Mai Aini refugee camp in Tigray, northern Ethiopia.