Brenden Varma, a UN Public Information Officer based in New York, recently returned from a two-month mission in Iraq, where he helped to promote participation in national elections. His experience opened his eyes to the complexities of life in the country.

“At the United Nations, there are two worlds: Headquarters and the field. United Nations Headquarters in New York is our mothership. In iconic rooms such as the General Assembly Hall and the Security Council Chamber, our Member States make decisions that affect people across the globe. Meanwhile, the field is where those decisions are felt most acutely. It’s where you find our peacekeeping missions, our vital humanitarian operations, our mediators engaging in shuttle diplomacy.

In the summer of 2021, I was deeply enmeshed in the world of Headquarters. As Director of Communications and Spokesperson for the President of the General Assembly, it was my job to tell the press and public what was going on in the Organization’s most democratic body. My focus was on resolutions, declarations and high-level meetings. I was surrounded by words—but not seeing first-hand if or how those words were actually improving people’s lives.

Deployed to a divided country

Around that time, I happened to stumble across a movie about Sérgio Vieira de Mello, a United Nations hero who lost his life following a shocking attack in Iraq in 2003. I had joined the Organization shortly before that attack and never forgot the impact that it had on my colleagues and me. The United Nations was suddenly a target. The field seemed like a much scarier place at the time.

But nearly two decades later, I didn’t feel fear when I watched the film; I was inspired. Sérgio could have spent his United Nations career in glass skyscrapers and air-conditioned conference rooms. But he chose to go to the field—to be closer to the people the United Nations is meant to serve. It had been years since my last field posting, and I wanted to go back.

What I didn’t know at the time (since my focus was on the General Assembly) was that the Security Council had just adopted a new resolution concerning Iraq. Resolution 2576 (2021) of 27 May 2021 welcomed the request of the Government of Iraq for support for its 10 October 2021 elections—and called for a United Nations strategic messaging campaign to educate and inform Iraqi voters on election preparations, as well as related United Nations activities.

With less than five months between the passage of that resolution and the elections, the United Nations Assistance Mission for Iraq (UNAMI) needed to get a communications team on the ground immediately. That’s when I was asked to deploy to Baghdad.

Of course, it’s one thing to feel inspired after watching a film and another to actually move to a place that the United Nations classifies as a dangerous hardship duty station. But it didn’t take me long to decide. After discussing it with my family, I said yes to UNAMI.

From a professional standpoint, I felt ready, but I soon learned how hard it was to work on a country file without actually being on the ground. For example, while still in New York, one of my first tasks was to come up with a hashtag for our new electoral communications campaign. I chose #Vote4Iraq to encourage Iraqi voters to put their country above any other affiliation. But the Kurdish-speaking national staff in UNAMI advised me to consider other options as well.

They told me that invoking the name of the country would alienate Kurds. It wasn’t until I visited the Kurdistan Region of Iraq (KRI) three months later that I truly understood what they meant. In and around Erbil, the regional capital, I frequently saw the Kurdish flag flying—but not always the Iraqi flag. I realized that not all Iraqi citizens saw themselves as Iraqi, and our communications would need to take that into account.

At the United Nations, people often refer to “mission life”, as if all missions were pretty much the same. But that’s not the case. When I worked in Jerusalem and Pristina, I had my own apartment in town. I could meet my new local friends in restaurants and parks. On the other hand, in Mogadishu in 2013, I was confined to the United Nations compound.

I slept in a tiny, thin-walled container with no private bathroom. Food was only available in the bare-boned mess hall. Inadequate Wi-Fi service made it tough to keep in touch with family back home. It was normal to hear gunfire at night. And while we had access to a beach, swimming was discouraged due to sharks, riptides and pirates.

My Baghdad experience was somewhere between that of Jerusalem/Pristina and Mogadishu. All United Nations personnel—whether they worked for UNAMI or the agencies—had to live on the compound. Leaving the secured Green Zone wasn’t possible without a security escort. While the collective accommodations were great for intra-United Nations camaraderie, the atmosphere could often feel claustrophobic. Time outdoors had to be limited due to the intense daily temperatures of 46 degrees centigrade. I understood why staff were entitled to one week of rest and recreation (R&R) after every four weeks of service.

But I couldn’t complain about my living conditions in Baghdad. My apartment had a modern bathroom, kitchen and television, and the compound had a gym, pizzeria and barbershop. There were even facilities where staff could play tennis, football and ping-pong.

Focus on the people

Before arriving in Baghdad, I had drafted a communications strategy focused on one of the priority areas of the Department of Global Communications (DGC): “human-centred storytelling”. UNAMI leadership wanted our campaign to focus in part on convincing Iraqis to participate in the elections.

So, with a team of videographers, I set out to amplify the voices of Iraqi citizens who planned to vote. Iraqis may or may not listen to the United Nations, I thought, but surely they would be inspired by each other. I imagined a video in which a woman walks past a rundown hospital in her neighbourhood and says, ‘I’m going to vote because I want better healthcare.’

But again, my Headquarters assumptions were confronted by realities on the ground. First, there was fear. Given the security constraints, it was already tough to find ordinary Iraqis to talk to, and when we did, many were reluctant to have their faces shown on camera.

They feared repercussions if the wrong people saw them speaking out on what could be perceived as a political topic. There was also a general distrust of the authorities. Many Iraqis felt that there was no point in voting because fraud and a flawed system would just return the same old politicians to power.

Our message was that, although these elections were Iraqi-owned and Iraqi-led, the United Nations was standing with Iraq every step of the way.

In the end, we did manage to tell some Iraqis’ stories, but the scepticism I sensed among the people made me focus on another UN communications priority area as well: sharing accurate information to combat fake news. We started producing videos and holding dialogues that took the rumours we were hearing and countered them with facts. We explained how the upcoming elections would be different from past ones—and how technical support from the United Nations would help ensure a credible process.

For the first time, UNAMI started livestreaming press conferences by the Special Representative of the Secretary-General (SRSG) for Iraq. We enlisted local artists to paint pro-voting murals throughout the country. We also worked with Iraqi social media influencers to reach the country’s youth, since 60 per cent of the population was 25 years of age or younger.

In the end, election day came and went. The voter turnout wasn’t particularly high or low. But in a country where a significant number of voters I spoke to told me they would prefer having a monarch, it was crucial to remember that, as the United Nations, our role was a supporting one.

Ultimately, it was for the Iraqi people to decide what kind of system they preferred and whether they wanted to participate in it. On the bright side, we were happy to see that the elections had proceeded smoothly, had featured significant technical and procedural improvements, and could serve as an important stepping stone for the future.

While in Iraq, aside from my work, I started a purely personal project. I decided to use my own Instagram account to show my followers what the country really looked like. Because most people could not go as tourists to many of the places I was visiting, their knowledge of Iraq was probably based on what they saw on the news, which was largely destruction and despair.

The Iraq I was experiencing didn’t match up with that perception. I saw bohemian cafés in Baghdad, trendy rooftop restaurants in Duhok and Erbil, and beautiful river views in Basra. I met young Iraqi artists, filmmakers, musicians, and entrepreneurs. I bought streetwear from local designers and smiled when I saw Iraqi hipsters who looked like they had been plucked off the streets of Brooklyn.

The United Nations had sent me to Baghdad to advise on electoral communications, but it had also given me the chance to get to know a country that remains mysterious to much of the world. I knew that I was lucky. Lucky to grow and learn. Lucky to be a part of something bigger than myself. And lucky to serve in the field.”

Interview: Time to rethink tourism, an economic lifeline for millions

People for Peace: Dreaming of a mine-free Lebanon 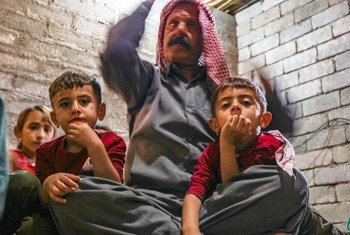 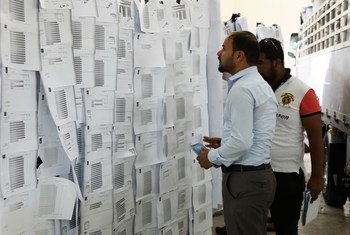 Following “hard-earned” parliamentary elections on 10 October, Iraqis of all political stripes must exercise restraint, eschew violence and await the outcome’s final certification by the Federal Supreme Court, the senior UN official in the country told the Security Council on Tuesday.