© UNOCHA/Ali Haj Suleiman
Children walk past ruins on their way home from school in Syria.

Syria’s declaration of its chemical weapons programme cannot be considered accurate due to gaps, inconsistencies and discrepancies, the High Representative for Disarmament Affairs told the Security Council on Wednesday.

Izumi Nakamitsu also urged the country to cooperate with international body, the Organisation for the Prohibition of Chemical Weapons (OPCW), adding that “full cooperation” is “essential to closing these outstanding issues.”

The UN disarmament chief was presenting an update on the implementation of Security Council resolution 2118 (2013) regarding the elimination of Syria’s chemical weapons programme.

According to Ms. Nakamitsu, Syria has submitted 17 amendments and several supplements to its initial declaration. So far, 20 of the 24 outstanding issues remain unresolved.

She told Council Members that these outstanding points are “of concern” and involve undeclared research, production, and the arming of unknown quantities of chemical weapons.

There are also “significant quantities” of chemical warfare agents or precursors, and chemical munitions, whose fate has not yet been fully verified.

Ms. Nakamitsu listed for ambassadors all the information OPCW has not yet received, such as a declaration on all undeclared types and quantities of nerve agents produced at a former production facility, details of damage caused during an attack on 8 June 2021, or the unauthorised movement and remains of two destroyed cylinders.

Once the Syrian National Authority provides sufficient information and explanations, Ms. Nakamitsu assured, a team from OPCW will assist, if needed, in amending the initial declaration.

The High Representative also informed that OPCW has not been able to schedule the 25th round of consultations in Damascus because of the “continued refusal” by the Syrian Arab Republic to issue an entry visa for one member of the team.

Efforts to convene a limited meeting with Syrian experts at the OPCW’s Headquarters, in The Hague, were also unsuccessful.

The disarmament chief also noted that the COVID-19 pandemic has impacted the OPCW’s ability to deploy to the country, but it remains ready to do it.

Ms. Nakamitsu concluded by reiterating her full support for the integrity, professionalism, impartiality, objectivity and independence of the work of the OPCW. 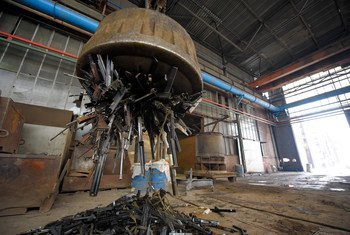 The High Representative for Disarmament Affairs told the Security Council on Wednesday that Small Arms and Light Weapons (SALW), in the context of peacekeeping operations, are a "threat" that can "exacerbate conflict, render arms embargoes ineffective, endanger ‘blue helmets’, humanitarian workers and local populations, and complicate peace agreements."