France should consider the economic and development benefits of partnership with people of African descent, the head of a Working Group appointed by the UN Human Rights Council said in a statement on Monday.

Dominique Day, chairperson of the Working Group of Experts on People of African Descent, was speaking in the wake of its visit to Paris from 13 to 16 December.

Country visits by UN rights experts take place at the invitation of the host government and focus on fact-finding, diagnosis and recommendations.

However, the Working Group’s mission was different, as members examined opportunities and obstacles to achieving the Sustainable Development Goals (SDGs) specific to people of African descent.

These issues include invisibility or disregard of present-day experiences that may stem from the legacies of colonialism and the Trans-Atlantic slave trade.

“Despite a narrative of meritocracy, people of African descent at varied stages of their educational and professional development, including those with significant success, reported that benediction by institutional gatekeepers was indispensable to access and recognition, even in the presence of significant skill and talent,” said Dominique Day, the Working Group’s chairperson.

“A racialized gatekeeping is contrary to human rights, imposes severe development costs to people of African descent individually and as a whole, and deprives France of a proven economic driver in multiple fields,” she added.

During the mission, the Working Group engaged with human rights institutions, the UN educational and cultural agency, UNESCO, and a wide range of civil society representatives familiar with the development context.

“The delegation welcomed ongoing efforts in some areas to shed light on key barriers and to build networks to ensure people of African descent may access the formal and informal mechanisms necessary to their hiring and professional development,” the statement said.

The visit was also an opportunity to offer specific “drivers of development” that the French authorities could use to promote improvements, and the mission was guided by the Working Group’s Operational Guidelines on inclusion of people of African descent in the 2030 Agenda.

Ms. Day said UNESCO’s Slave Route Project was a key source of knowledge for the experts, as it helped to highlight the historical and legacy issues driving current experiences reported by people of African descent.

“Although the Working Group did not meet at this stage representatives of the French Government, it will share its observations gathered during this visit to initiate a dialogue based on the human rights commitments of the country. France should consider the economic and development benefits of partnership with people of African descent,” she said.

The Working Group will share its preliminary observations with the French Government and propose the start of dialogue in the framework of an official country visit.

Independent experts, Special Rapporteurs and members of Working Groups are appointed by the UN Human Rights Council to monitor and report on specific country situations or thematic issues.

These persons serve in their individual capacity and are not UN staff, nor are they paid by the UN. 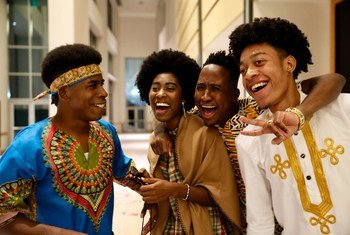 The UN on Tuesday celebrated the enormous contributions the African diaspora has made in every field of human endeavour, marking the first-ever International Day for People of African Descent.