The deteriorating security situation in the occupied West Bank, including East Jerusalem, took centre stage at the Security Council on Tuesday as the UN Special Coordinator for the peace process in the region, expressed his “continued concern” over recent developments.

“It is crucial that all parties take immediate steps to lower tensions and restore calm”, he said, warning that if left unchecked, the situation in the West Bank would further deteriorate – impacting security in Gaza and undermining the fragile peace that has held since May.

Read #UN Special Coordinator @TWennesland's full briefing to members of the #SecurityCouncil on the situation in the #MiddleEast, reporting on UNSCR 2334.#Israel #Palestine🔗https://t.co/dPsscvScqF pic.twitter.com/GbX0jREW10

Devoting his briefing to the implementation of Resolution 2334 (2016), which calls for the cessation of all settlement activities in the OPT, the Special Coordinator said that “violent incidents have unfortunately continued”.

While updating ambassadors on a host of incidents, he said that14 Palestinians had been killed, along with three Israelis, since 29 September.

He mentioned that the most recent confrontation had occurred on Sunday, when hundreds of settlers attempted to enter the Homesh outpost to set up illegal structures, breaking through Israel Security Forces’ (ISF) barricades and using violence against Israeli soldiers, “including hitting one soldier with a vehicle”.

Meanwhile, there have been some positive developments, such as a virtual meeting between United States and Palestinian officials last Tuesday to renew the US-Palestinian Economic Dialogue – the first such meeting in five years.

Reminding that Israeli settlements constitute “a flagrant violation” of UN resolutions and international law, Mr. Wennesland drew attention to the advancement of building plans in areas “crucial for the contiguity of a future Palestinian State”, including Atarot and Givat Hamatos.

“I call on the Government of Israel to cease the advancement of all settlement activities immediately”, he said.

The Special Coordinator also raised the alarm over pending evictions of Palestinian families from homes that they have lived in for decades in the Sheikh Jarrah and Silwan neighbourhoods in East Jerusalem, calling on Israeli authorities to “end the displacement and eviction of Palestinians”, and enable them to “build legally and address their development needs”.

He also welcomed plans for several thousand Palestinians housing units in the occupied East Jerusalem neighborhood of al-Issawiya and in Area C, urging Israel to continue advancing these types of projects and issuing building permits for previously approved Palestinian plans in Area C and East Jerusalem.

“The continuing violence, incitement to violence and attacks against civilians, including acts of terrorism and settler-related violence, exacerbate mistrust and undermine a peaceful resolution to the conflict”, said Mr. Wennesland.

“There can be no justification for such acts; they must be condemned by all… and all perpetrators must be held accountable”.

To maintain calm, strengthen Palestinian institutions and restore hope, the parties must make concerted efforts to reverse the deteriorating security and socio-economic situation across the OPT”, the UN official said.

“Furthermore, steps by all parties are urgently needed to shore up the economic and institutional stability of the PA [Palestinian National Authority], including through the implementation of needed reforms”, he added.

And more must be done to solidify the cessation of hostilities and meet the needs of the population in the Gaza Strip.

“For any durable stability, movement and access in and out of the Strip must be improved, with a view to a full lifting of the closures in line with UN Security Council resolution 1860 (2009)”, Mr. Wennesland stated.

In closing, the UN official observed that the rising levels of violence in recent weeks “should be a clear warning to us all”.

“If left unaddressed, the festering conflict drivers…will drag us into yet another destructive and bloody round of violence. We must act now to prevent that from happening”, he said.

Mr. Wennesland urged all parties to take positive steps and implement reforms that increase the PA’s ability to deliver for the Palestinian people while simultaneously halting actions that undermine its authority.

He said 2021 had been “a year of significant shifts in the political context affecting this conflict” that has posed “one of the most challenging set of circumstances to face the Palestinian Authority since its establishment” and maintained his determination to find opportunities next year to reverse the current “negative trajectory”, while working towards constructive engagement.

“The UN remains committed to supporting Palestinians and Israelis to resolve the conflict and end the occupation through the achievement of a two-State solution, in line with relevant United Nations resolutions, international law and bilateral agreements”, he concluded. 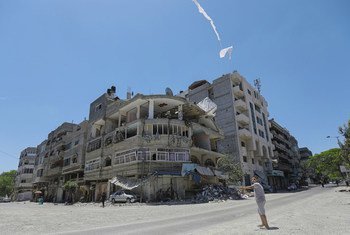 Israel-Palestine: Risk of 'deadly escalation' in violence, without decisive action

With violence continuing daily throughout the Occupied Palestinian Territory, the Special Coordinator for the Middle East Peace Process urged the Security Council on Tuesday to adopt a more coordinated approach to the region.