© UNHCR/Katsiaryna Golubeva
People stranded in Belarus at the Polish border are receiving emergency assistance from UNHCR, IOM and the Belarus Red Cross.

Belarus and Poland must resolve the migrant and refugee crisis at their mutual border, the UN human rights office, OHCHR, said on Tuesday, describing the on-going situation as “appalling”.

OHCHR again called on the two countries to address the matter in line with their obligations under international law.

Practices and policy choices are being made by both #Belarus &amp; #Poland that violate refugees' &amp; migrants' rights, incl. pushing people up to, or across, the border. We urge the two countries to address the appalling situation and #StandUp4Migrants' rights: https://t.co/EbGpyB9sOD pic.twitter.com/7DI8upACOb

This follows a visit by a UN human rights team to Poland from 29 November to 3 December.  Members were not granted access to the restricted border area, while Belarus denied a request to visit.

The team interviewed families and individuals who had arrived in Poland via Belarus between August and November, OHCHR Spokesperson Liz Throssell told journalists in Geneva.

Interviewees described dire conditions on both sides of the border, with limited access to food, clean water and shelter, amid freezing temperatures.

“The majority said that, while in Belarus, they had been beaten or threatened by security forces, and also alleged that the Belarusian security forces forced them to cross the border, instructing them when and where to cross, and prevented people from leaving the border area to return to (the capital) Minsk,” said Ms. Throssell, speaking in Geneva.

Several interviewees reported that Belarusian security forces had demanded “extortionate sums for food and water”, she added.  OHCHR called on the authorities to investigate these “disturbing allegations.”

The UN team also heard numerous reports of people being immediately and automatically returned to Belarus, including children and individuals who had reportedly requested international protection.

“Recurring practices by the two countries of pushing people up to, or across, the border meant many migrants and refugees the team interviewed had crossed the border multiple times, in both directions,” said Ms. Throssell.

She explained that under current Polish legislation, people who enter the country through unofficial border crossings can be immediately returned.

OHCHR urged Poland to review the legislation and instead conduct “meaningful individual assessments” to determine protection needs, in line with international law.

As Poland also systematically detains those migrants and refugees who it has not returned to Belarus, the UN rights office recalled that detention should be “an exceptional measure of last resort” and only for a limited time.

Many of those interviewed said they had not been given proper physical and mental healthcare in detention, and had limited contact with the outside world, including with independent lawyers, human rights monitors and civil society organisations.

Additionally, those who support refugees and other migrants, as well as journalists covering the situation, have also reported challenges in doing their work, including cases of harassment and intimidation.

“In an atmosphere dominated by a focus on security and fuelled by anti-migrant narratives, practices and policy choices are being made on both sides that violate the human rights of refugees and migrants,” said Ms. Throssell.

“We therefore once again urge Belarus and Poland to ensure that refugees’ and migrants’ human rights are at the centre of their actions.” 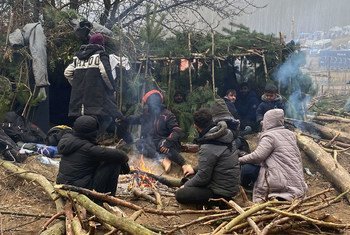 The International Organization for Migration (IOM) and partners, are scaling up aid along the border between the European Union and Belarus, amid worsening winter weather, which is leading to rising deaths due to hypothermia among asylum seekers stranded there.