Venezuela violated a jurist’s right to be tried by an independent tribunal and his right to the presumption of innocence, the UN Human Rights Committee said on Wednesday.

In the decision, the Committee requested that Venezuela declare the criminal proceedings against Allan Brewer Carías null and void, and that he be awarded adequate compensation. It also called for the State to take steps to prevent the recurrence of such violations.

Mr. Carías has been living in the United States since 2005, unable to return to his country for fear of being arrested and detained.

The jurist was prosecuted in 2005 for his alleged involvement in the drafting of what is known as the "Carmona Decree".

This decree ordered the establishment of a transitional government after a coup d’état in Venezuela in April 2002, which saw the late President Hugo Chávez ousted from office for 47 hours, before he was restored to power.

According to Mr. Carías, he received a call in the early hours of 12 April 2002 from Pedro Carmona Estanga, the opposition leader installed by the military, who requested his urgent legal opinion.

Mr. Carías said he was taken to the Fort Tiuna military complex in Caracas where he was shown the draft decree, with which he completely disagreed and played no part in drawing up.

In January 2005, he was charged with “conspiracy to alter the Constitution through violent means” for his role in the “discussion, preparation, drafting and presentation” of the decree.

During criminal proceedings in the following months, according to Mr. Carías, all the prosecutors and judges involved in his case were temporary Government appointees.

The jurist left Venezuela for the United States in September 2005.

In June 2006, the Provisional Supervisory Judge issued an indictment against him and ordered him to be placed in pre-trial detention.

After repeated and unsuccessful attempts to challenge his indictment, he announced that he would not return to Venezuela until his right to due process could be ensured.

Mr. Carías brought his complaint to the Human Rights Committee in December 2016.

From the information provided by the jurist, the Committee found that Mr. Carías was not afforded the right to be tried by an independent tribunal, in violation of International Covenant on Civil and Political Rights.

In a statement, Committee member Carlos Gómez Martínez said that “judicial authorities need to be able to work independently and free from undue interference or influence from the executive agencies.”

“It is of extreme importance to the Committee that the right to be tried by an independent tribunal encompasses the independence of prosecutors," he added. 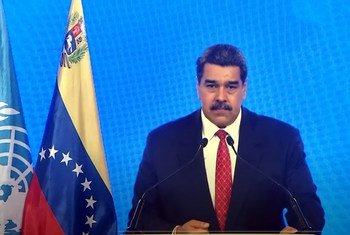 President Nicolás Maduro on Wednesday said his country was the victim of a “fierce campaign” of permanent and systematic aggression through economic and financial sanctions coming from the United States and its allies.