Michel Baronian
Mont Blanc, the highest mountain in the Alps and Western Europe.

“The mountain for me is like the ocean, a space of liberty where you go where you want. We must respect these beautiful and magical places.”

That’s the message on International Mountain Day from passionate climber and UN Geneva worker, Michel Baronian, who’s been an avid mountaineer for more than 40 years.

Although he has stopped keeping track, Michel estimates that he has climbed Mont Blanc – Western Europe’s highest mountain at 4,807 meters – more than 100 times.

He has also scaled peaks higher than 8,000 meters, such as Annapurna in Nepal, without using supplemental oxygen.

“When I am up there, it is a moment of happiness. The mountain is my church. I go there to find myself again. I find a lot of serenity and happiness,” says Mr. Baronian, whose dream is to scale Mount Everest one day.

Mountain tourism accounts for around 15 to 20 per cent of global tourism. UN Geneva’s host country, Switzerland, boasts more than 200 ski regions and is home to the Monte Rosa, the Dom and the Matterhorn, which dominate the landscape above 4,000 meters.

As Switzerland and other mountain countries mark International Mountain Day on 11 December, under the theme of sustainable mountain tourism, keeping the world’s mountains clean is increasingly becoming a key concern for environmentalists and tourism boards alike.

Mr. Baronian has seen his share of litter on the high-altitude climbs he has tackled. He attributes this to mistaken attitudes about pollution, and to inexperienced climbers. To add to the problem, helicopters, which can’t land above 6,000 meters, often can’t reach many high-altitude camps for cleaning.

“When people are exhausted, they abandon everything and descend to save their lives,” explains Baronian, who has carried down litter he’s found on high peaks. “I didn’t have the conscience to leave it behind.”

He suggests that climbers should have to take a picture of their camps both before and after use, to prove they cleaned up after themselves, in the same way people must document their ascent to high peaks with a photo.

“This may be utopian, but the issue really needs to be raised and considered by the entire mountaineering community,” he says.

“Sustainability is a demanding topic for the tourism sector; for this reason, we are building up a national competence centre for sustainability in tourism,” he says.

For those new to mountaineering and tourism in the Alps, tour operators, tourist offices as well as mountain guides have an important task in sensitizing and demonstrating to people how to behave sustainably in the mountains.

Michel Baronian
Mont Blanc, the highest mountain in the Alps and Western Europe.

During the COVID-19 pandemic, more people than usual fled to the Swiss mountains to cope with the ongoing restrictions and reconnect with nature.

“Mountain tourism at the national level has become an increasingly popular modality for tourism, because it’s safer and it’s outdoors,” says RosaLaura Romeo, a Programme Officer with the Mountain Partnership Secretariat at the UN’s Food and Agriculture Organization (FAO).

“The health of mountains has a direct impact on our life wherever we live,” says Ms. Romeo, “because mountains are the water towers of the world. We all benefit from mountains, even if we are not aware of it.”

At an event in Geneva on beating plastic pollution on Friday, Lesya Nikolayeva, an environmental expert, said that a host of volunteer initiatives were part of the solution. The Clean-Up Tour, a Summit Foundation initiative to clean up mountains, was active in Switzerland, she said, and through it volunteers had already collected over 150 tonnes of waste since its creation in 2001 – proof that plastic pollution can be tackled locally. 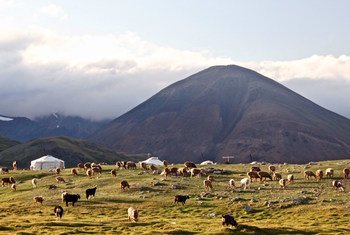 From the Field: Saving the Mongolian musk deer

The number of musk deer in Mongolia has plummeted by some 83 per cent since the 1970s, landing them on the country’s red list of critically endangered species. A UN-supported biodiversity initiative is helping to stop the deer from disappearing altogether.