© UNICEF/Tiatemjen Jamir
Communities in Kohima, India, are being vaccinated against COVID-19.

Early laboratory data on the effectiveness of existing vaccines against the Omicron COVID-19 variant is useful, but it is still unclear how effective these will be in treating severely sick patients, a UN health agency panel said on Thursday.

The development follows reassurance from the World Health Organization (WHO) that available vaccines “hold up very well” in protecting people from the worst forms of coronavirus sickness for six months or more, with a “minor, modest reduction” thereafter, particularly among over-65s or those with underlying medical conditions.

“The neutralization data has an underpinning, but it’s really the clinical data that are going to be most influential about how to manage an Omicron situation,” said Dr Kate O’Brien, Director, Department of Immunization, Vaccines and Biologicals at WHO.

On the issue of herd immunity, Dr O’Brien said that collective immunity remained out of reach, partly because the vaccines in circulation today, for all their efficacy, were “not performing at the level where the concept of herd immunity is likely to be something that can be achieved”.

This was at least in part because of the lack of universal vaccine coverage which has seen wealthier countries benefit from immunization campaigns, while poorer nations have suffered a dearth of lifesaving jabs, Dr O’Brien noted.

The #Omicron variant has now been reported in 57 countries, and we expect that number to continue growing. There is some evidence that Omicron causes milder disease than #Delta, but it is still too early to be definitive. Any complacency now will cost lives," -- @DrTedros pic.twitter.com/QXNrK7Ovnz

On so-called “breakout infections” among individuals already vaccinated, it was “not surprising” that these had increased in line with greater vaccination coverage, the WHO official insisted.

“That does not mean the vaccine is not working, it simply means that a greater and greater number of people have actually been vaccinated.”

As Omicron spreads, Dr O’Brien highlighted that those most at risk remained the unvaccinated, who represented 80 to 90 per cent of those who have fallen seriously ill from coronavirus.

The risk that the pandemic will not be snuffed out will continue if countries decide to hold on to their COVID-19 vaccines, rather than sharing them under the WHO-partnered COVAX equitable distribution scheme.

She added: “As we head into whatever the Omicron situation is going to be, there is risk, that the global supply is again going to revert to high-income countries hoarding vaccines to protect, you know, in a sense, in excess their opportunity for vaccination and a sort of ‘no-regrets’ kind of approach.”

It also remained “perplexing” that some countries were inconsistent in trying to reduce COVID-19 transmission, Dr O’Brien said. “On the one hand, (nations are) pursuing a sort of no-holds-barred approach to the vaccines, at the same time not using masks, handwashing, crowds, all of the other measures that we know are highly effective at reducing transmissions.”

Among its recommendations on vaccines, the SAGE panel of experts repeated its earlier advice that the best approach was to use the same type of vaccine for the first two doses where possible, rather than a mix-and-match approach combing different jabs.

This was not always possible in countries where there was insufficient supply or where communities were hard-to-reach, the experts explained.

In the case of health workers, it depends what vaccines they have had historically: “If they have been immunised with ‘inactivated’ vaccines, then, yes, they should be part of receiving, as soon as possible, a third dose of the vaccine.”

Dr Cravioto explained that he was referring to the fact that in many lower-income countries, these health workers had received vaccines that had not received Emergency Use Listing status, from the WHO. These include CanSino “and that vaccine would also require a second dose …since we feel that there’s not enough protection afforded by the first dose”, he said.

One jab of J&J still enough

On the Johnson & Johnson single-shot vaccine, Dr Cravioto noted that one dose was still considered to provide full immunity.

He added that for those countries that had decided to distribute a second dose, “this can be given two to six months after first one, and in a sense, we still feel that lengthening the interval between these two doses is the best way to go. So, the closer you can get to six months - especially in those that are over 65 years of age - the better response you might have to this second dose.”

70 per cent vaccination target must be met to ward off Omicron: WHO 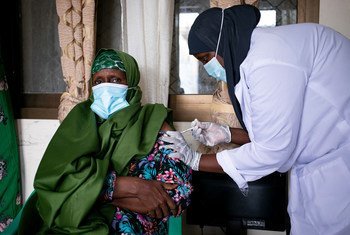 As scientists continue to investigate the Omicron COVID-19 variant, the UN World Health Organization (WHO) on Friday urged countries not to panic but to prepare for its likely spread. 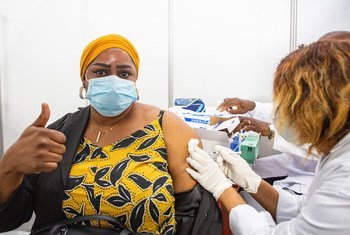