© UNFPA Ethiopia/Paula Seijo
A woman holds a message which says "relief" in Tigrinya during an exercise at a safe house in Tigray, Ethiopia.

Experts appointed by the UN Human Rights Council have called for urgent action to end violence against women and girls caught in the Tigray conflict in northern Ethiopia.

In a statement issued on Friday, they expressed grave concern about the widespread sexual and gender-based violence attributed to Ethiopian, Eritrean, Tigray and Amhara forces, as well as allied militia.

These incidents constitute some of the most egregious violations of human rights and humanitarian law, according to the experts.

“They appear to have been used as part of a deliberate strategy to terrorize, degrade and humiliate the victims and the ethnic minority group that they belong to with acquiescence of the State and non-State actors’ parties to the conflict,” they said.

“These brutal acts have devastating physical and psychological impacts on the victims, which are exacerbated by the lack of access to assistance, support and redress for survivors.”

The UN continues to voice alarm over the war in Tigray, which began just over a year ago.  Last month, the UN Human Rights High Commissioner, Michelle Bachelet, noted that the conflict has been marked by “extreme brutality”.

The rights experts said although the exact prevalence of gender-based violence is unknown, estimates are shocking.

From November 2020 through June of this year, some 2,204 survivors reported sexual violence to health facilities across the Tigray region.

Furthermore, one of the one-stop centres reported that the majority of victims, or 90 per cent, were underage girls, and estimated that visits have quadrupled since the conflict began.

However, the experts said these figures are an underestimation of the true extent of gender-based violence being committed.  Cases are severely under-reported due to fear, stigma and inability to access health or support centres.

“Despite the humanitarian situation, proper access to facilities is vital to ensure adequate care, for instance for women and girls at risk of developing life-threatening infections, or to allow for abortion for women and girls who become pregnant as a result of rape,” they stressed.

The experts reported that the violence occurred in both rural and urban areas, in the victims’ homes or in places where they were sheltering.

In some cases, women and girls were raped because of their perceived or actual political affiliation, to pressure them to reveal the whereabouts of their male relatives, or as acts of revenge.

“In addition to the grave consequences of sexual violence, most victims have also been harmed in other ways by the conflict including by having close relatives killed.”

The UN experts reminded parties to the conflict of their duty to respect and protect human rights, and to prevent violations in any territory under their control.

They also urged the sides to implement recommendations contained in a joint report by the Ethiopian Human Rights Office and its UN counterpart.

Those recommendations include taking immediate measures to protect women and girls from rape and other forms of gender-based violence, providing redress to victims, facilitating immediate access to health care, and ensuring independent and impartial investigation of all incidences of sexual violence.

The 14 experts who issued the statement receive their mandates from the UN Human Rights Council, which is based in Geneva.

They monitor specific country situations or thematic issues, such as violence against women, discrimination against women and girls, and the rights of internally displaced persons.

The experts are independent of the UN and serve in their individual capacity.  As such, they are not UN staff, nor are they paid by the Organization. 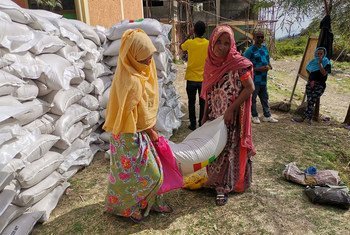 9.4 million people are ‘living their worst nightmare’ in northern Ethiopia due to ongoing conflict

The number of people in need of humanitarian food assistance across northern Ethiopia has spiked as a direct result of ongoing conflict, the United Nations World Food Programme (WFP) said on Friday.