Disabled people in Haiti who have been driven from one temporary shelter to another, as result of an earthquake, fire, and mounting gang violence, have finally been able to find a safe home, just ahead of the International Day of Persons with Disabilities, marked annually on 3 December.

Samuel believes that being visually impaired in Haiti is a punishment. After being fired from his job because of his disability, he found it impossible to find work. “It has been extremely challenging to feed my family, let alone pay for my children’s tuition,” the father of two says.

Visually impaired for more than a decade, 48-year-old Samuel spent most of this time in Camp La Piste, in Port-au-Prince, the capital of Haiti. The site for internally displaced people had been home to people with all forms of disabilities since the deadly 7.0 magnitude earthquake that struck Haiti in 2010.

IOM/Monica Chiriac
Samuel (centre) and his family wait to leave a temporary site for internally displaced people in Port-au-Prince.

Earthquakes and fire are not the only dangers faced by Haitians like Samuel. Since March 2020, an alarming increase in gang violence in ​​Port-au-Prince has led to the displacement of around 19,000 people.

The violence is disrupting the delivery of humanitarian aid to around 1.5 million people in the capital and across the country according to the UN Office for the Coordination of Humanitarian Affairs (OCHA).

The disabled and displaced have regularly suffered due to ongoing violence. The UN’s International Organization for Migration (IOM) is providing life-saving protection assistance for the most vulnerable people affected by violence.

IOM project officer Claire Gaulin says people with disabilities have specific needs. “Those people who are forcibly displaced, due to natural disasters or gang related violence, need support to be relocated to a safe place where they can live in security and dignity,” adding that “they also require medical screening to identify their health care needs. Many have not had medical consultations for a long time which sometimes can make their conditions worse.”

They have also received crutches and wheelchairs as well as dignity kits, a telephone support hotline and help for putting their documentation in order.

“People with disabilities in Haiti also frequently face discrimination, so they need a specific support for their integration and participation in their community,” says Claire Gaulin. “Ultimately, they need support to gain back their autonomy, which can be done by organizing training to help them develop income generating activities and by giving them the opportunity to access specialist services.”

IOM set up a voluntary relocation support service for over 10,000 people living in the neighbourhoods most affected by violence, including more than 5,200 women and girls and 550 people with disabilities.

In the meantime, IOM and its partners have also renovated the Delmas 103 site, known to most as the Ecole Communale de Pétion-Ville. The school is now equipped with new desks and blackboards, and ready to welcome students again, as soon as it is safe to do so.

Now Samuel has been given new accommodation his focus is turning towards the health of his two teenage sons who, due to a hereditary condition, are already losing some of their sight.

“The boys are haunted by the idea that they will one day go blind like their father,” Samuel says. “Now that I am no longer living in temporary sites, I can spend time to find the means to take care of my family, and continue with my medical therapy in a safe environment.”

IOM/Monica Chiriac
Families living in a school have been relocated by IOM to other safe places. 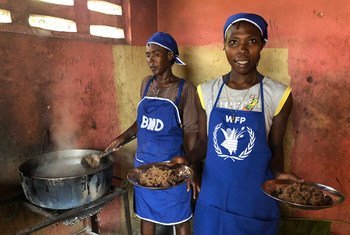 The children of families who were affected by the massive earthquake which devastated large parts of south-west Haiti in August this year are receiving free hot meals at school as part of an initiative by the UN’s World Food Programme (WFP) to support the recovery of the country’s most vulnerable communities.