UN will use technology and medical capacity to improve peacekeeping

UN will use technology and medical capacity to improve peacekeeping

Beginning on 7 December, ministers from around the world will meet in Seoul, Republic of Korea, to close UN Peacekeeping capability gaps through concrete pledges with a focus on technology, medical capacity building, reducing the UN’s environmental footprint and increasing the number and role of women peacekeepers, UN officials said at a press conference on Monday.

The Seoul UN Peacekeeping Ministerial will be hosted for the first time in Asia and will serve as a platform for Member States to strengthen their support to UN Peacekeeping.

Hundreds of people from across the world including foreign and defense ministers, heads of international organizations, academics, and journalists are expected at the conference to enhance the impact of the UN’s twelve peacekeeping operations

The two-day event is the latest in a series of meetings at the head of State, Government or ministerial level since 2014. The last was held in 2019 in New York.

UN peace operations rely on experienced &amp; capable staff officers to achieve mission mandates in increasingly complex and dangerous environments. Their work is highlighted in the context of capability gaps being addressed at the 2021 Seoul #PKMinisterial. More 👇 #A4P pic.twitter.com/19OevFnE5T

In March, Secretary-General António Guterres launched a new implementation strategy for the Action for Peacekeeping (A4P) initiative called A4P+. The objective is to accelerate progress on collective goals set out in the Declaration of Shared Commitments on UN Peacekeeping, adopted in 2018 by 154 Member States and four partner organizations.

Mr. Lacroix said that the Peacekeeping Ministerial is a crucial opportunity to garner political support for peacekeeping operations from the international community, including for the seven priorities that are comprised in A4P+.

“There have seen a number of achievements,” stressed Under-Secretary-General Lacroix, underscoring improvements on the safety and security of peacekeepers, on equipment, and performance assessment, as well as a significant increase in the number of women in peacekeeping. “But we need to do more and that’s the purpose of what we call Action for Peacekeeping+.”

Meanwhile, Under-Secretary-General for Operational Support Atul Khare, added that the complex environments in which the missions operate require creative and agile solutions.

In this area, the Ministerial will draw on the Strategy for the Digital Transformation of UN Peacekeeping.

“We have made important progress in addressing the gaps in medical support in peacekeeping missions, but much more needs to be done”, Mr. Khare said.

During the event, he expects Member States to contribute to several initiatives, such as a new Casualty Tracking System, a Mental Health Strategy for uniformed personnel, and a Public Health Surveillance System.

Women, Peace, and Security, which has been a key focus of previous Ministerial meetings, will have a dedicated side event.

The Under-Secretary-General highlighted the “urgency” of accelerating this agenda, saying “gender parity is a non-negotiable priority, and it’s more than a numbers issue”.

“There is abundant evidence that shows how women’s participation improves peacekeeping performance”, he explained.

As reducing the carbon footprint of peacekeeping missions is a key environmental objective, Mr. Khare hopes to see Member States discuss opportunities to curtail its impact.

Under-Secretary-General Lacroix called on peacekeeping stakeholders to intensify efforts on conduct and discipline including on sexual exploitation and abuse. Despite efforts to end these grave violations, recent cases demonstrate the need to do much more, he added.

Under-Secretary-General for Management Strategy, Policy and Compliance Catherine Pollard pointed to efforts that would strengthen the accountability of peacekeepers.

Against the backdrop that the UN lives with the risk of sexual exploitation and abuse wherever it operates, she described it as “one of the most serious issues of accountability” for the Organization, adding that it is “a particularly insidious breach of trust to those we are mandated to serve and protect”.

Ms. Pollard said that the UN will recall to Member States, techniques to manage exploitation risks, including by training commanders who will be deployed in the field.

“We will particularly use the occasion of the Ministerial to advance our approach to addressing paternity and child support claims that arise from allegations of sexual exploitation and abuse, which are difficult claims with very human consequences”, she stated.

The event is a follow-up conference to the UN Leaders' Summit on Peacekeeping in 2015, which was co-hosted by former President of the United States Barack Obama and former UN Secretary-General Ban Ki-moon.

Its unique strengths include legitimacy, burden sharing, and an ability to deploy and sustain troops and police from around the globe – integrating them with civilian peacekeepers to advance multidimensional mandates.

Over the past 70 years, more than one million men and women have served under the UN flag in more than 70 UN peacekeeping operations.

Current system will not protect us from the next pandemic, ‘which could happen at any time’ 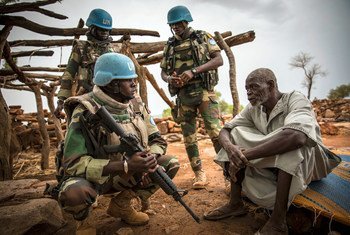 Over the next 10 years, the world could well be transformed by potentially lethal new technologies, climate disruptions and disruption caused by expanding cities, the UN peacekeeping chief told the Security Council on Monday, outlining the adaptations required to keep the Organization’s flagship enterprise fit-for-purpose as it confronts daunting new security threats.