“Catastrophic and famine-like conditions” hang over Afghanistan’s farmers and herders, whose needs continue to worsen with the onset of winter, UN humanitarians said on Friday.

While humanitarian access has never been better, prices are soaring and needs continue to outpace the resources provided, the Food and Agricultural Organization (FAO) explained.

“The situation is disastrous. Every farmer we’ve spoken to has lost almost all of their crops this year, many were forced to sell their livestock, they have accumulated enormous debts and simply have no money,” said Richard Trenchard, FAO Representative in Afghanistan.

“No farmer wants to leave their land. But when you have no food, you have no grain from the previous harvest, there are no seeds in the fields and your livestock are gone, you have no choice.”

The UN agency said that 18.8 million Afghans are unable to feed themselves every day, and that this number is set to rise to nearly 23 million by the end of the year.

What started as a drought crisis has spiralled into economic disaster, with nine in 10 major urban centres also expected to face extreme hardship, as debts pile up and savings dwindle.

Worryingly, the already widespread drought looks set to worsen in Afghanistan, as farmers and herders brace for a likely second consecutive year of drought in 2022, with La Niña expected to bring drier than normal conditions to Afghanistan in the coming months.

This situation will create a very real famine risk in 2022, unless immediate large-scale support to protect these people and their livelihoods arrives very soon, FAO warned.

“What’s needed now obviously is to get them seeds, get them fertiliser and food assistance that the World Food Programme is providing…but also, it’s cash,” Mr. Trenchard insisted.

After visiting Zendajan district in Herat province in the far west of the country - one of 25 provinces that have been hit by drought - the FAO official reported that families had run out of people and institutions they could approach to borrow money.

People were even “selling anything then can” to get money, he added.

© FAO/Alessio Romenzi
Beneficiary Niaz Mohammad shows how the pomegranates he has harvested don't ripen in his orchard around Ghra village in Daman district south of Kandahar, Afghanistan.

The situation is dire because agriculture is the backbone of Afghan livelihoods and critical for Afghanistan’s economy. According to FAO, around 70 per cent of Afghans live in rural areas and an estimated 80 per cent of all livelihoods depend on farming or herding.

Mr. Trenchard said that widespread drought had left families with nothing to eat during the current lean season, after harvests were down 80 to 90 per cent.

He called for a massive increase in humanitarian assistance, after seeing for himself the scale of suffering on the streets of rural Heart.

“The only food they have is food that people give them as they pass by, et cetera. It’s cold there, it’s a tough, tough situation and what terrifies me is if those rural livelihoods collapse, we’ll see massive displacement.”

FAO urgently needs $115 million to reach five million men, women and children this winter and next spring. Of this amount, one out of every five dollars will directly support Afghan women.

A wheat cultivation assistance package costing $157 enables a farm family to meet its cereal needs for a year, compared with $1,080 required to cover the minimum food needs of an average family, something that few can afford to do right now.

To help, FAO is already distributing wheat cultivation packages for Afghanistan’s winter wheat season across 31 out of 34 provinces. They include high quality and locally-supplied certified wheat seeds and technical training to ensure the best possible results for farmers.

“If we didn't get this bag of certified wheat seeds, we wouldn’t be able to cultivate wheat this year. These improved wheat seeds will grow a much better yield,” said Esmatullah Mirzada, a farmer from Safar Khan village, in Zendajan district of Herat Province.

In a related development, UNHCR, the UN Refugee Agency, expressed alarm on Friday at the deportation of Afghan asylum-seekers by the Tajik authorities this week.

It said that 11 men, women and children were “forcibly returned” to Afghanistan on 11 November, before their claims for asylum and protection could be examined.

There have also been “increasing obstacles” for Afghan citizens seeking safety and access to asylum procedures in Tajikistan more generally, UNHCR insisted, noting that local authorities had stopped issuing residence permits to all newly arrived Afghans, “despite the fact that such documentation is a pre-requisite to applications for asylum”.

FROM THE FIELD: Nepal’s magic mushrooms 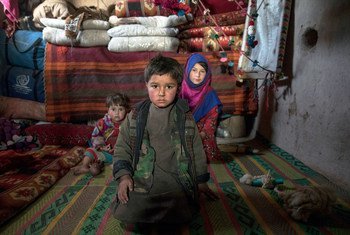 Interview: On brink of humanitarian crisis, there's 'no childhood' in Afghanistan

For over 70 years, the UN Children’s Fund (UNICEF) has had a presence across Afghanistan – even as the Taliban secured power over the summer.