UNOCHA/Giles Clarke
A displaced man who fled his village now lives in a tent settlement on the outskirts of Marib in Yemen.

Ahead of Thursday’s Security Council meeting behind closed doors on Yemen, the UN Special Envoy, Hans Grundberg, said that a UN-led political process could still be part of a sustainable solution to the conflict.

Participating by teleconference, Mr. Grundberg briefed the Council Members about his three-day visit to Taiz governorate, where he held meetings in Taiz city, Turbah and Mokha, and discussed the urgent necessity for an end to the violence.

“These visits have given me a first-hand experience of the impact of the conflict on civilians in Taiz, including the difficulties they face moving through their daily lives”, Mr. Grundberg said in a statement.

The visits also gave him “the opportunity to hear directly from Yemeni men, women and young people, on how a UN-led political process can help to address the situation in Taiz as part of a sustainable solution to the conflict.”

UN Special Envoy Grundberg condemns the assassination of pregnant journalist Rasha Abdullah in #Aden and the attempted killing of her husband Mahmoud Al-Atmi – another journalist.

The representatives raised concerns about the targeting of civilians in residential neighborhoods and severe restrictions on the safe and free movement of people and goods due to the continued road closures. They also discussed the sharp deterioration of the economy and basic services.

Mr. Grundberg stressed the need for comprehensive solutions and inclusive political dialogue. He called for all stakeholders to engage in discussions on political, military and economic issues that concern all Yemenis.

In Mokha, he met with the local authority, the Political Bureau of the National Resistance and the Al-Hirak Al-Tihami.

According to him, fighting continues along nearly 50 front lines, including in Ma’rib, where at least 35,000 people have been forced to flee since September.

The humanitarian community is scaling up assistance, but it is quickly getting outpaced by the increasing scale of humanitarian needs.

The UN is deeply concerned that the conditions could quickly get much worse. If fighting reaches the city itself, agencies estimate it could displace another 450,000 people.

The UN continues to call for an immediate end to the Ma’rib offensive and a nationwide ceasefire.

So far, aid agencies have received about 55 per cent of the funding they require this year. This has helped to keep famine at bay and achieve other important results, but money is quickly running out.

In a separate statement, the Special Envoy also condemned the assassination of Yemeni journalist, Rasha Abdullah Al Harazi, in Aden, last Tuesday. She was pregnant and her husband was also seriously injured.

“I offer my condolences to the bereaved family and reiterate my calls for justice and accountability. Journalists everywhere must be able to work without fear of retaliation", Mr. Grundberg said.

Mrs. Harazi was killed when a device planted in the car she was travelling in with her husband, detonated. Both were employed by a Gulf-based television channel.

The UN Educational, Scientific and Cultural Organization’s (UNESCO) Director-General also condemned the “heinous attack”, noting that Mrs. Harazi had been a UNESCO trainee in 2019.

“Attacks on journalists undermine freedom of expression and the media’s capacity to keep the public informed, which can prove vital in times of conflict. Information is also essential to nourish public debate, counter hate and contribute to conflict resolution”, Audrey Azoulay said.

Security Council appeals for end to violence in Myanmar 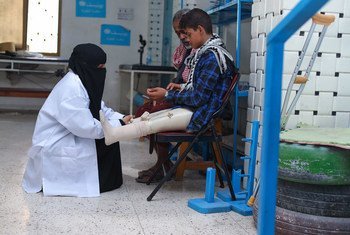 Yemen: Four children killed or maimed a day, as war grinds on

At least 8 children have reportedly been killed or injured in escalating violence in Yemen in the past five days.