UNHCR Indonesia
The Governor of DKI Jakarta together with UNHCR Indonesia Representative and members of KADIN (Indonesia Chambers of Commerce and Industry) observe a young refugee being vaccinated.

Refugees in Indonesia, many of whom have fled Afghanistan’s mounting crises, have lagged far behind the rest of the population when it comes to COVID-19 vaccinations. The UN is helping to reverse this trend.

One recent Thursday, Ali Madad Ibrahimi accompanied an elderly man from Afghanistan to a registration desk under a big red and white tent in Jakarta’s central district.

He translated instructions into the Afghan Dari language, and the pair entered a spacious hall where blue-uniformed officers sat behind rows of desks. He stayed by the man’s side until a COVID-19 vaccine dose has been safely injected into his left arm.

However, until just over a month ago, Mr. Ibrahimi – himself an Afghan refugee and an official interpreter with the UN’s refugee agency (UNHCR) since 2019 – had to do his work virtually: Government COVID-19 regulations meant that even boarding a bus to a neighbourhood where many Afghan refugees lived, required a vaccine certificate.

That changed in late September though, when Mr. Ibrahimi became one of the first refugees in Indonesia to be fully vaccinated, thanks to a private scheme jointly organized by several UN agencies.

Around the same time, on September 21, a new decree from Indonesia’s Ministry of Health promised to dramatically increase access to vaccinations for the 13,273 refugees in Indonesia, reflecting broader steps towards greater inclusion for one of the most vulnerable groups in the country.

“I’m very grateful to the UN team for providing vaccines for me and other refugees”, he says. “Now that I have been fully vaccinated, I can get back to my routine, assisting my fellow refugees who need interpreters”.

UNHCR Indonesia
A view of Bulungan Sports Hall, Jakarta, where the refugee vaccination event took place on 7 October 2021. This vaccination event was a collaboration of UNHCR, DKI Jakarta Provincial Government, and KADIN (Indonesia Chambers of Commerce and Industry).

More than half of the refugees in Indonesia are from Afghanistan, and the majority of them are members of the Hazara ethnic minority, a mostly Shiite Muslim community who were brutally oppressed under the Taliban, before the US invasion in 2001.

For many, watching the Taliban retake Kabul in August, was a devastating reminder of the circumstances that forced them to flee.

Since retaking control of Afghanistan, Taliban officials have forcibly evicted thousands of Hazara families from their homes, according to the NGO Human Rights Watch.

Another rights organization, Amnesty International, reported in October that the Taliban had massacred 13 ethnic Hazara people in Daykundi province, including a 17 year-old girl.

For Mr. Ibrahimi, a former baker, such reports bring back memories of the day in June 2013 that Taliban soldiers stopped him on a journey to buy ingredients for his bakery in Afghanistan’s Kandahar province. They accused him of selling bread to US soldiers and tortured him while he was in detention.

Fearing for his own safety and that of his family if he stayed, Mr. Ibrahimi fled Afghanistan overland, leaving his wife, one child, and a new-born daughter behind. “Two days full of nightmares,” he says. “I was lucky they released me in the end.”

After crossing the border into Pakistan, a smuggler convinced Mr. Ibrahimi to go to Indonesia where, he was told, he could be resettled. That turned out not to be true, and he has been living in Jakarta for the past eight years.

UNHCR Indonesia
A refugee woman getting her first shot of the Sinopharm COVID-19 vaccine.

Many refugees in Indonesia have waited a similar length of time. Indonesia considers itself a transit country, one through which refugees and asylum seekers travel en route to a safe third country.

But because opportunities for resettlement in a third country are virtually non-existent, many refugees and asylum seekers end up immobilized for years with no prospect of resettlement or a safe return.

The hardship of refugees in Indonesia is exacerbated by restrictions on some of their most basic human rights: they are deprived of their right to work, for example, and their access to school is often impeded.

Indonesia is not a State party to the 1951 UN Convention on Refugees, the key legal framework that defines who is a refugee and details the rights to which refugees are entitled, but the country has ratified key human rights treaties and, says Ann Maymann, UNHCR’s representative for Indonesia, the country “therefore has international obligations to ensure that refugees can exercise their basic rights”.

‘COVID-19 does not know borders’

Discrepancies in access to COVID-19 vaccinations at a national level, mirror broader inequalities that have inhibited the global effort to stop the spread of the pandemic.

“COVID-19 does not know borders, differentiate between lower middle and upper-income economies, or care whether you are poor or rich,” says Valerie Julliand, UN Resident Coordinator for Indonesia.

“The Ministry of Health’s new decree is an important step towards leaving no one behind and is a welcome expression of solidarity with some of the country’s most vulnerable communities.”

Although COVID-19 has devastated both advanced economies and the developing world, refugees are among those who have been hit the hardest. While many governments provided subsidies to offset the economic impact of the pandemic and helped school children with distance learning, refugees often did not have access to such measures.

Meanwhile, around 86 per cent of refugees are hosted in developing and low-income countries, which tend to have less resilient healthcare systems and struggle to cope with the needs of their own populations.

Vaccinations can reduce pressure on those healthcare systems, but refugees did not often have access they required.

UNHCR says that the precariousness of refugees’ situation in Indonesia has led to a deterioration in refugees’ mental health. Refugee and writer Hussain Shah Rezaie claimed in a recent Op-Ed for the Jakarta Post newspaper, that 12 refugees had died by suicide in the previous two years.

UNHCR Indonesia
Refugees wait to be vaccinated under a big tent prepared just outside the sports hall.

Refugees are an asset

In the same way that equitable access to COVID-19 vaccinations benefits both refugees and the communities that host them, better access to education and employment for refugees ends up also being universally beneficial, says Ms. Maymann.

“We continue to advocate for refugees’ inclusion and for the government to see that refugees are an asset,” she says. “Refugees bring productivity, they can start businesses that employ locals, pay taxes, and generate income.

“They enrich the culture of the host countries by bringing different practices, foods, and religions. And given the chance, they can contribute to a stronger and more vibrant world.”

For Mr. Ibrahimi, becoming vaccinated was an important step towards greater inclusion and a decent life. “I don’t mind living in Indonesia, the people are very nice,” he says, “I hope one day I can open my own bakery and make Afghan bread popular here, or in another country, if I ever get resettled”.

The UN in Indonesia
♦ Receive daily updates directly in your inbox - Subscribe here to a topic.
♦ Download the UN News app for your iOS or Android devices. 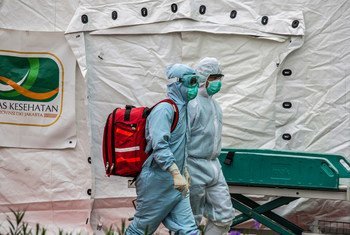 A “lack of global solidarity” including the hoarding of vaccines by richer nations as well as slow vaccination rate has contributed to Indonesia becoming the epicentre of the COVID-19 outbreak in Asia, according to the UN’s top official in the country. 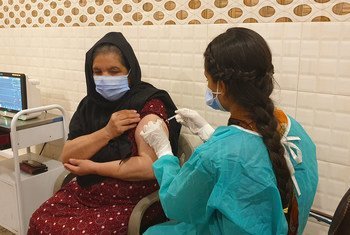 Underfunding has left a “yawning gap” in the UN Refugee Agency’s ability to protect forcibly displaced people worldwide from the fallout of the COVID-19 pandemic, the UNHCR said on Friday.