UNDP Afghanistan
In addition to a prolonged drought and the effects of the COVID-19 pandemic, Afghanistan is contending with the upheaval caused by the current political transition.

Human rights defenders in Afghanistan report that they are now enduring a “climate of fear”, threats, and becoming increasingly desperate over conditions in the country, an independent UN expert said on Wednesday.

Stating that “the threat is very real”, Mary Lawlor, the UN Special Rapporteur on human rights defenders, called for an urgent coordinated response from the international community.

“Defenders tell me of direct threats, including gendered threats against women, of beatings, arrests, enforced disappearances, and of defenders being killed. They describe living in a climate of constant fear”, she said.

Those most at risk are people documenting alleged war crimes, women, in particular criminal lawyers, cultural rights defenders, especially those working in banned sectors such as musical performance, and others from minority groups.

Some told Mrs. Lawlor that they have erased their online data history to evade identification, and that the Taliban are using other ways to find them. One of them, for example, was identified by an injury to his leg.

According to her, the Taliban have raided offices of human rights and civil society organisations, searching for names, addresses and contacts.

“Many defenders are well known in their local communities, in particular in rural areas, and have left for the anonymity of the cities, but even there, they are forced to constantly change locations,” the UN expert said. “Most have also lost their source of income, further limiting their options to find safety.”

Mrs. Lawlor called for immediate international support, including an urgent plan for the evacuation of those at high risk, along with their families.

She also said these are the people who have been fighting for 20 years to advance human rights in the country.

“Many say they feel abandoned. States who have supported their work for the past two decades must do more to provide visas, travel documents and routes to asylum for the hundreds of defenders left behind and at risk.”

To produce her report, the rapporteur received online testimonies from around 100 human rights defenders.

A woman living in western Afghanistan told her that every day 5 or 10 people are being arrested, with families afraid of being recognised.

“Family members don't even claim the dead bodies in the street. They are afraid. Human rights defenders were not prioritised in the evacuation efforts”, Mrs. Lawlor said.

Another activist argued that “the Taliban cannot be expected to stick to their word” and that “the future looks dark.”

A woman who worked in 34 provinces, for women's rights, assured that she wants to protect the gains made in the last 20 years, but she can’t leave her home and go to the office. People like her, she said, “are being smeared as foreign agents.”

Another defender said that 38,000 prisoners have been released, some of them with problems with those working on justice and rule of law, and they are now “a direct threat to human rights defenders.”

Finally, a mother complained to Mrs. Lawlor about the torture of her 12-year-old child by the Taliban, asking for help.

“She thought that even now we could defend their children's rights, but what was not clear to her, was that I have no more authority and the ability to defend her and her son, as I myself have been side-lined along with human rights activism in Afghanistan”, the rapporteur said. 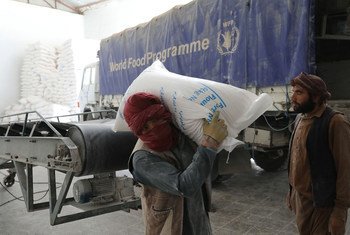 A deadly attack on a military hospital in the Afghan capital, is a reminder that health facilities should never be a target, the UN’s Deputy Spokesperson said on Tuesday.