Rafique Gangat
The market in Old City of East Jerusalem.

Nearly 700,000 Israeli settlers are now living in illegal settlements in East Jerusalem and the West Bank, they stated.

In recent weeks, Israeli authorities have approved plans for more than 1,700 new housing units in two settlements in East Jerusalem, Givat Hamatos and Pisgat Zeev, the experts reported.  Developments are underway for an estimated 9,000 more in Atarot, and another 3,400 in an area just east of Jerusalem.

In the West Bank, plans to construct some 3,000 housing units are also being advanced, while reports indicate the Israeli government wants to retroactively legalize several settlement outputs.

“The very raison d’être of the Israeli settlements in occupied territory – the creation of demographic facts on the ground to solidify a permanent presence, a consolidation of alien political control and an unlawful claim of sovereignty – tramples upon the fundamental precepts of humanitarian and human rights law,” said the experts.

‘The engine of occupation’

The Special Rapporteurs characterized Israeli settlements as “the engine of the occupation”, and responsible for a wide range of human rights violations against the Palestinian people.

These include land confiscation, severe restrictions on freedom of movement, and racial and ethnic discrimination.

“Most seriously, the purpose of settler implantation – rupturing the relationship between a native people and its territory – is the denial of the right to self-determination, which is at the very core of modern human rights law,” they said.

The UN has repeatedly stated Israeli settlements in occupied Palestinian territory are a flagrant violation under international law, the rights experts recalled.

“As well, the Israeli settlements are a presumptive war crime under the Rome Statute of the International Criminal Court (ICC), and should be treated as such by the international community,” they added.

The rapporteurs have welcomed criticism of the expansion plans, including by the United States and the European Union, though stressing “criticism without consequences means little in these circumstances.”

The rights experts urged the international community to support the ongoing investigation into Israeli settlements by the Prosecutor’s Office at the International Criminal Court.

They also called on governments to ensure that corporations and institutions under their jurisdiction “have no involvement in aiding, assisting or investing in the settlements.”

As independent experts, they operate in their own capacity and are neither UN staff, nor are they paid by the Organization. 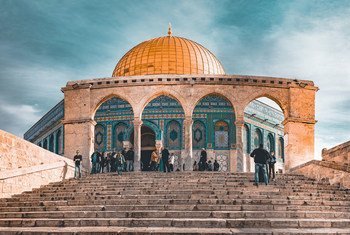