© WFP/Claire Nevill
Food is distributed to people in the Afar region of Ethiopia.

The UN Secretary-General, António Guterres, is extremely concerned by the escalation of violence in Ethiopia and the recent declaration of a state of emergency.

In a statement released on Tuesday afternoon local time in New York, his Spokesperson said “the stability of Ethiopia and the wider region is at stake.”

Mr. Guterres reiterates his call for an immediate cessation of hostilities and unrestricted humanitarian access to deliver urgent life-saving assistance to the restive northern regions; Tigray, Amhara and Afar.

The UN chief also asks for “an inclusive national dialogue to resolve this crisis and create the foundation for peace and stability throughout the country.”

.@antonioguterres calls for an immediate cessation of hostilities in Ethiopia &amp; and unrestricted humanitarian access. The stability of the country is at stake. Read full statement 👉 https://t.co/7TeNdt9bN0

On Twitter, the Under-Secretary-General for Political and Peacebuilding Affairs, Rosemary DiCarlo, echoed this sentiment.

According to her, "the possible consequences of a spiralling conflict on the country and the region are frightening to contemplate, but it's not too late to choose dialogue."

"Silence the guns. Now, before more needless death and destruction", she added.

According to the latest update from the UN Humanitarian Affairs Office (OCHA), released on Monday, the overall situation in Northern Ethiopia “remains unpredictable, volatile, and highly tense.”

Fuel for humanitarian operations has not entered Tigray since early August, forcing most humanitarian partners to significantly reduce or suspend their activities.

In addition to lack of fuel, activities are compromised by the lack of supplies, cash, banking services and communications. The UN and its partners are only able to continue small-scale response in a few areas.

In fact, no convoys with supplies have entered Tigray since 18 October. As a result, nutrition response for children and women decreased in Tigray by at least 50 per cent.

With the conflict expanding, the humanitarian situation in the neighbouring regions to Tigray, Afar and Amhara, continues to deteriorate.

Ongoing fighting is preventing the delivery of assistance and is causing displacement, disruption of livelihoods and food insecurity.

In Amhara, 852,000 people have been reached with food aid since August.

Since fighting began in early November 2020 between Government troops and regional forces loyal to the Tigray People’s Liberation Front (TPLF), refugees have also been arriving at remote border points that take hours to reach from the nearest towns in Sudan. Many are women and children.

Most left with barely any belongings and arrived exhausted from walking long distances over harsh terrain.

Around 45,449 refugees from Ethiopia’s Tigray have fled into Sudan, and 96,000 refugees from Eritrea are hosted in the region. Before this crisis, there were already around 100,000 internally displaced in Tigray.

Thousands are feared killed in the north, amidst allegations of widespread human rights abuses on all sides, with more than two million forced to flee their homes.

Over the past few months, humanitarian needs have grown, amid killings, looting and destruction of health centres and farming infrastructure, including irrigation systems that are vital to the production effort.

Acute food insecurity is affecting up to 7 million people throughout Ethiopia. 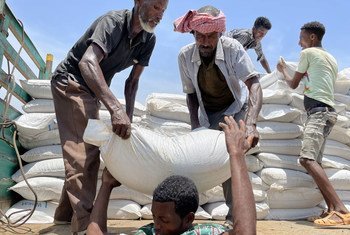 A UN humanitarian aid flight destined for the capital of the Tigray region in northern Ethiopia, was forced to return to Addis Ababa due to airstrikes on Friday, raising “serious concerns” for the safety of staff working on the ground, said the UN’s Emergency Relief Coordinator, in a statement.