The eyes of the world are on Glasgow, Scotland, as the United Nations climate summit known as COP26 opens with UN diplomats and politicians alike calling for more action – and ambition – to set out new commitments for curbing greenhouse emissions and adapting to the impacts of a warming planet.

With the official opening of the two-week conference coming hours after preliminary climate talks among world leaders at the G20 summit in Rome saw meager forward movement, and the release of a key report from the UN weather agency, WMO, warning that the past seven years are set to be the hottest on record, and our planet is heading into “uncharted territory”, the stakes for COP26 couldn't be higher.

Upon his departure from Rome, UN Secretary-General António Guterres said in a tweet that while he welcomed the G20’s recommitment to global solutions, he was leaving the summit with his hopes unfulfilled.

“But at least they are not buried,” he said, and added: “Onward to Glasgow and COP26 to keep the goal of 1.5 degrees alive and to implement promises on finance and adaptation for people and the planet.”

Mr. Guterres is addressing the COP26 World Leader’s Summit, which brings together Heads of State and Government, civil society and business leaders, who have been invited to set out the ambitious actions they are taking to reduce emissions, scale-up adaptation and mobilize finance, and to signal their commitment to ensuring that COP26 keeps 1.5°C in reach.

Addressing the Conference's preliminary opening on Sunday, Abdulla Shahid, the President of the UN General Assembly called for an honest look at where things stand: “We have had decades to argue the facts about climate change, about the power of renewables, about the fine details of monitoring or cost-sharing. Yet, we have still failed to act with the conviction and determination required.”

“That may be a hard truth, but it is the truth.” And yet, “another truth: we are entirely capable of turning this around, if we so choose,” Mr. Shahid stated, declaring: “We have the science. We have the resources. We agree on the urgency. We have run out of excuses. It is time to do the right thing. Let us work together…and get this done.”

Meanwhile, Patricia Espinosa, the Executive Secretary of UN Climate Change (UNFCCC), said the world was on track for a global temperature rise of 2.7C – far from the agreed 1.5C goal. “Clearly, we are in a climate emergency. Clearly, we need to address it. Clearly, we need to support the most vulnerable to cope. To do so successfully, greater ambition is now critical,” she underlined.

“We have no choice but to make COP26 a success. For that, we need unity of purpose. We need to leave Glasgow with a balanced package of decisions that reflects the positions of all countries. With a willingness to compromise among the many perspectives we can arrive at workable, ambitious solutions that will help us keep the 1.5C goal within reach. We stand ready to work with all Parties and to leave no voice behind to reach this important goal,” Ms. Espinosa said.

There’ll be much more to come on all Monday’s activities, but in the meantime, check out our explainer, which will give you all the details about COP26, and tell you what’s at the heart of the discussions that will be taking place over the next two weeks.

UN News has you covered

UN News has a team of reporters in Glasgow that will be bringing you up-the-minute coverage of the events at COP26, as well as interviews with UN officials, climate experts and influencers, and even a few surprises. Follow us here.

To get the latest UN News articles on the climate crisis, and updates on the big stories from COP26 sent straight to your inbox, subscribe here. 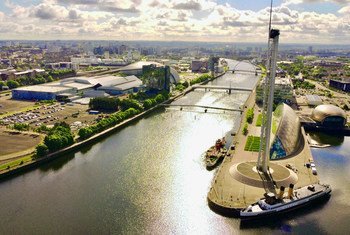