Ahead of the UN Climate Conference COP26, the UN High Commissioner for Human Rights said on Thursday it was time now to act, and put “empty speeches, broken promises, and unfulfilled pledges behind us”.

“We need laws to be passed, programmes to be implemented and investments to be swiftly and properly funded, without further delay”, Michelle Bachelet said in a statement.

According to her, only urgent action “can mitigate or avert disasters that will have huge – and in some cases lethal – impacts on all of us, especially our children and grandchildren.”

Ms. Bachelet said that Member States attending the meeting in Glasgow, Scotland, starting next Sunday, “need to fulfil their existing climate finance commitments, and indeed increase them, not ignore them for a second year in a row.”

Only urgent #ClimateAction can mitigate or avert disasters that will have huge impacts on all of us, especially our children and grandchildren.We must change course now – it is the only option if we want to safeguard humanity.#COP26

Support to those most affected

People most at risk from the adverse effects of climate change, including poor and marginalised communities, should be the first recipients of those resources, she added.

“And those directly affected should have a seat at the table. Their meaningful participation is key to effective and equitable action.”

States also need to agree to environmental and social safeguards. They should also ensure that those harmed when climate action is taken, under Article 6 of the Paris Agreement, have access to effective remedies.

“This is a human rights obligation and a matter of survival. Without a healthy planet to live on, there will be no human rights. And if we continue on our current path, there may be no humans”, Ms. Bachelet argued.

The world's premier intergovernmental human rights body, the Human Rights Council, adopted last month a landmark resolution recognising for the first time that every human being has a right to live in a clean, healthy and sustainable environment.

For the High Commissioner, “this was a major step forward”, but those “declarations of principles have to be turned into concrete action backed by resources.”

“Let me be very clear: the triple threat of climate change, pollution and biodiversity loss constitutes the single greatest challenge to human rights in our era”, she argued.

According to her, governments and other authorities, businesses and individuals have a responsibility to act, and should do it by shifting to a sustainable, zero-carbon economy, and stop subsidizing activities proven to harm our only home.

“We must change course now. It is the only option if we want to safeguard humanity”, she concluded. 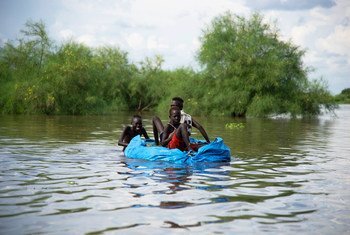