In a joint statement, the experts called the decision “a frontal attack on the Palestinian human rights movement, and on human rights everywhere.”

“Silencing their voices is not what a democracy adhering to well-accepted human rights and humanitarian standards would do”, they add.

Calling upon the international community to act, they argue that anti-terrorism legislation must never be used to unjustifiably undermine civil liberties.

According to them, the UN Security Council, the General Assembly and the Human Rights Council have all “been clear” about this issue.

“The misuse of counter-terrorism measures in this way by the government of Israel undermines the security of all,” the group of 17 experts said.

The six Palestinian organizations being redesignated are Addameer, Al-Haq, Defense for Children International – Palestine, the Union of Agricultural Work Committees, the Bisan Center for Research and Development, and the Union of Palestinian Women Committees.

Among those groups they work with are women and girls, children, peasant families, prisoners and civil society activists, all of whom face increased levels of discrimination and even violence, the experts said.

According to the UN experts, “these organisations speak the language of universal human rights.”

The redesignation as terrorist organisations, in effect, bans the work of these human rights defenders, and allows the Israeli military to arrest their staff, shutter their offices, confiscate assets and prohibit their activities.

In at least one case, according to the experts, the decision may have been taken as a form of reprisal for cooperation with UN entities.

“The Israeli military has frequently targeted human rights defenders in recent years, as its occupation has deepened, its defiance of international law has continued and its record of human rights violations has worsened,” the experts say.

They note that most international and Israeli human rights organisations face challenges, but also argue that Palestinian human rights defenders “have always encountered the severest constraints.”

Finally, the experts call upon the international community to use its full range of tools to request that Israel reverses this decision.

“These civil society organisations are the canaries in the human rights coalmine, alerting us to the patterns of violations, reminding the international community of its obligations to ensure accountability, and providing voices for those who have none,” they conclude.

Special rapporteurs and other independent UN rights experts are appointed by the Human Rights Council. They are neither paid for their work, nor UN staff, and are independent of any government or organisation, and serve in their individual capacity.

On Sunday, Tor Wennesland, the UN Special Coordinator for the Middle East Peace Process, said that he was deeply concerned by the continued Israeli settlement expansion in the occupied West Bank, including East Jerusalem.

His statement follows the announcement by the Israeli authorities of tenders for the construction of more than 1,300 housing units in the occupied West Bank.

Mr. Wennesland reiterated that all settlements are illegal under international law, remain a substantial obstacle to peace, and must cease immediately. 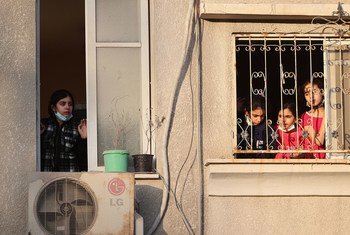 Political stagnation is “fuelling tensions, instability and a deepening sense of hopelessness”, the top UN official working towards peace in the Middle East warned the Security Council on Tuesday.