The process of drafting a new constitution for Syria has been “a big disappointment” UN Special Envoy for Syria, Geir Pedersen concluded on Friday. Following the end of discussions in Geneva, a consensus on how to move forward was not achieved, he added.

The drafting process between Government and opposition Co-Chairs of the Syrian Constitutional Committee (Small Drafting Body) and civil society began on Monday and was led by Mr. Pedersen.

.@GeirOPedersen remarks to the media following the conclusion of the Sixth Session of the Syrian Constitutional Committee https://t.co/XBWrdNNy3b

The aim was to produce a text that would help support a peaceful future for the country, after more than a decade of war. The development followed close to nine months of negotiations by the Special Envoy to reach a consensus on constitutional reform.

In January, he said that insufficient progress had been made at the fifth meeting of the 45-member Small Drafting Body and that there was a realization that “we could not continue the way we have been going”.

Under discussion were four agenda baskets set out in 2017 by then UN Special Envoy for Syria Staffan De Mistura. These describe the general terms of governance and political transition, constitution, elections and counterterrorism.

It is nearly two years since the first meeting of the full Syrian Constitutional Committee, a 150-member body which comprises 50 representatives of the Syrian Government, 50 from the opposition and 50 from civil society, represented by the so-called “Middle Third”.

Fifteen members of each bloc represent the Small Drafting Body. For the first time ever, committee co-chairs Ahmad Kuzbari, the Syrian government representative, and Hadi al-Bahra, from the opposition side, met together with Mr. Pedersen on Sunday morning.

“It’s fair to say it was ups and downs over the four days,” Mr. Pedersen said. “We had three days which went well and one more difficult day. In the end, we had good discussions on the different principles”.

Now they will have to concentrate on bringing the principles forward and agree on what they disagree over. But he warned that a proper understanding needed to be developed to move forward.

On a positive note, the negotiator said that trust had been established this week which could be built on. But he emphasized that political will was needed to find a way to deal with the process, so differences were minimised and areas of commonalities were identified.

Mr. Pederson added that he “could see possibilities, but as long as the parties have not concluded this, I’m not the one to conclude this on their behalf”.

© UNICEF/Giovanni Diffidenti
Young boys who work as market porters push a cart past ruins in Idlib, Syria.
♦ Receive daily updates directly in your inbox - Subscribe here to a topic.
♦ Download the UN News app for your iOS or Android devices.

Use of chemical weapons, under any circumstances, unjustifiable and abhorrent – UN 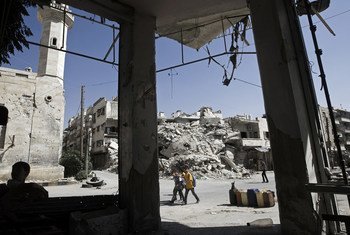 Four children killed on their way to school in northwest Syria

Four children – three boys and a girl - were killed on Monday morning while travelling to school in northwest Syria, along with a teacher, the UN Children’s Fund (UNICEF) said on Wednesday. 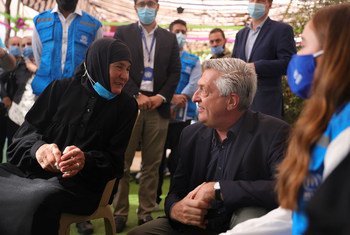