Gender-based violence, hate speech and disinformation are being used extensively online and offline, to chill or kill women’s freedom of expression, an independent UN human rights expert told the General Assembly on Monday.

Presenting her report on gender justice and free expression, Special Rapporteur on protecting freedom of opinion and expression, Irene Khan, said that “women’s voices are suppressed, controlled or punished explicitly by laws, policies and discriminatory practices, and implicitly by social attitudes, cultural norms and patriarchal values”.

As States continue to fail to respect and protect women’s equal rights, gendered censorship has become so pervasive, that women’s equality concerning freedom of expression remains a distant goal, according to the UN expert.

“Sexism and misogyny, which are dominant factors in gendered censorship, have been heightened by the rise of populist, authoritarian and fundamentalist forces around the world”, she said.

In some countries, young women and gender non-conforming people are being policed by fundamentalists and, under the guise of protecting ‘public morals’, censored and criminalized by Governments.

“Such action is paternalistic at best, misogynistic at worst”, underscored Ms. Khan.

The Special Rapporteur said women journalists, politicians, human rights defenders and feminist activists were being targeted with vicious, coordinated online attacks and intimidation, aimed at driving them off social media platforms and out of public life.

Noting that this undermines human rights, media diversity and inclusive democracy, she called on States and social media companies to – within the framework of international human rights law – urgently and decisively make digital spaces safe for all women and non-binary people.

“There can be no trade-off between women’s right to be free from violence and the right to freedom of opinion and expression”, argued Ms. Khan.

“States must not use efforts to address online gender-based violence, hate speech and disinformation as a pretext to restrict freedom of expression beyond what is permitted under international law”.

She urged governments to close the gender digital divide, gender data gaps, and other barriers to women’s right to information, including on sexual and reproductive health and rights.

“There is not just one divide but multiple divides that must be overcome” spelled out the Special Rapporteur.

The COVID-19 pandemic has created an additional imperative for stepped-up action.

“If women are to recover lost ground, if countries are to revive their economies and if governments are to regain public trust, then women’s equal right to freedom of opinion and expression must be front and centre on national and international agendas”, said Ms. Khan.

She added that gender justice requires “not only an end to unlawful interference with women’s freedom of opinion and expression” but also an enabling environment in which women can “exercise their agency and participate safely, fully and equally in the political, social cultural and economic life”.

Ms. Khan, who was appointed by the Geneva-based UN Human Rights Council on 17 July 2020, is the first woman to hold the position since the establishment of the mandate in 1993.

She and all Special Rapporteurs are tasked with examining and reporting back on a specific human rights theme, or a country situation.

The positions are honorary, and the experts are neither UN staff, nor paid for their work. 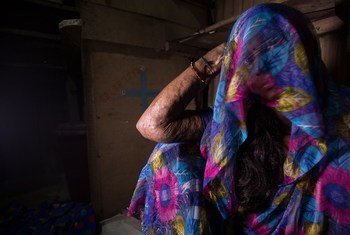 Top UN officials met in the margins of the 76th General Assembly on Thursday,  with a strong call to action to stamp out gender-based violence (GBV), amid a rise in forced displacement and other humanitarian emergencies around the globe.