World Bank/Flore de Préneuf
A person searches for water at a dry riverbed in eastern Kenya.

Immediate action is needed to respond to the severe drought that is ravaging communities in Kenya’s dry regions – categorized as Arid and Semi-Arid Lands (ASAL) - the UN’s humanitarian affairs office (OCHA) said on Friday.

By November, it will have nearly tripled since the same time last year, OCHA warned.  “People in the ASAL region are facing a dire situation”, said Stephen Jackson, UN Resident Coordinator for Kenya, as he launched the humanitarian Flash Appeal for the Kenya Drought response.

Speaking from Nairobi Mr. Jackson said people in Wajir, Northern Kenya, had not seen rain for over a year. Acute malnutrition rates are rising rapidly, posing an imminent risk to children and pregnant and lactating women.

📢FLASH APPEAL! A severe drought is ravaging communities across #Kenya.UN and partners seek US $139.5 M to deliver urgently-needed assistance to 1.27 M people whose lives have been hardest-hit by the crisis.https://t.co/QclPQi1UQa

He described how a mother at the El-Nur Clinic supported by the World Food Programme (WFP) and the UN Children’s Fund (UNICEF) “told me she could not feed her children that morning, and does not know if she would be able to put food on the table that evening.

Many of her livestock have already died because of the drought”. And “all of this comes on top of the 2017 drought, COVID and the recent locust infestations”, he noted.

“I met with women, men, and children in Wajir, who all told me how their lives are being upended by the drought.

“It is imperative that we act now, working closely with communities and community-led organizations, to alleviate the suffering that has been caused by back-to-back poor rainy seasons”, Mr. Jackson said, reiterating that “should the October ‘short rains’ now fail – as they are projected to do – Kenya will be facing an even deeper crisis”.

The Kenya Drought Flash Appeal calls for nearly $139.5 million to deliver relief to 1.3 million people whose lives have been hardest hit by the crisis.

An estimated $28.5 million has already been received from donors, including $5 million from the United Nations Central Emergency Response Fund.

The appeal brings together 45 humanitarian partners, including UN agencies, international non-governmental organizations (NGOs), national NGOs and the Kenya Red Cross Society, to complement the Government’s response to the drought crisis in the ASAL region.

Mr. Jackson pointed out that Kenya’s Government has already been responding to the crisis. Ksh 1.7 billion (around $17 million) in public funds has already been allocated and Kenya has announced a further Ksh two billion ($20 million).

Since January the UN and international partners have already been reaching almost half a million people to protect their lives and their livelihoods, he said, “But it is not enough”.

Kenya urgently needs approximately $60 million for food and job security, $40 million for nutrition, $20 million for Water, Sanitation and Hygiene (WASH), some $10 million for health investments, and $7 million for education and other related sectors, the UN Resident Coordinator for Kenya said.

“We aim to deliver a full package of support in counties that will face the deepest and most severe needs in the months to come”.

'Time to act is now'

Welcoming how the UN system in Kenya had already come together to “respond as one”, Mr. Jackson insisted on the urgency of the situation: “The time to act is now”. International support will save lives and livelihoods, he said.

The “severe impact of the global climate emergency is being felt across the Horn of Africa” he noted.

Referring to the recent Inter-Governmental Panel on Climate Change report he pointed out that “once sporadic droughts in Africa are becoming much more frequent, more severe and more long-lasting”.

Neither Kenya nor the African continent were major culprits in creating the climate emergency, he said, yet they are amongst those most heavily impacted by it. “We must do everything we can, immediately, to protect the lives of those already impacted by this deep and cruel drought”. 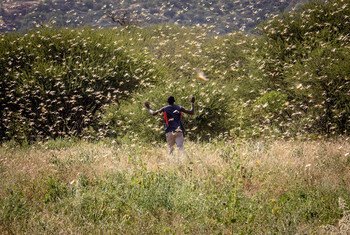 Many extreme environmental events have a devastating effect on people’s lives, and a new UN report reveals that many of them are linked by the same underlying causes. On the day the study is released, we look at the impact of a locust swarm on a Kenyan farmer, and the ways that Cyclone Amphan affected an Indian worker.