Vulnerable Haitian men, women and children on the move in the Americas, should not be expelled from countries where they have found shelter, UN agencies said in a protection appeal on Thursday.

In a joint appeal by UN migration agency IOM, the refugee agency UNHCR, Children’s Fund UNICEF, and human rights office OHCHR, they highlighted that many Haitians in the past decade have faced a series of natural catastrophes, acute food insecurity and gang violence.

UN agencies call on States to refrain from expelling Haitians without proper assessment of their individual situation under international law, to uphold the rights of Haitians on the move, and to offer more effective access to regular migration pathways: https://t.co/ASwxjofFxz pic.twitter.com/ZFpzfJMy3m

The situation inside Haiti “is bound to worsen” because of last month’s earthquake, making the island unfit for them to return, they added.

Their warning comes amid the reported expulsion of thousands of Haitians from a makeshift camp on the US border with Mexico.

Those who have left the Caribbean island include unaccompanied and separated children, victims of trafficking and survivors of gender-based violence.

Some may need international refugee protection while others may have different protection needs, the UN agencies said, before insisting that international law “prohibits collective expulsions and requires that each case be examined individually”.

They also pointed out that discriminatory public discourse disparaging migrants, risks contributing to racism and xenophobia.

Haiti continues to face an escalation in violence and insecurity, with at least 19,000 people internally displaced in the capital Port-au-Prince in the summer of 2021 alone, they said.

Well over 20 per cent of girls and boys have been victims of sexual violence. In addition, nearly 24 per cent of the population, including 12.9 per cent who are children, live below the extreme poverty line of $1.23 per day.

Some 4.4 million people, or nearly 46 per cent of the population, face acute food insecurity, including 1.2 million people who are at emergency levels and 3.2 million more having to cope at an official crisis level.

An estimated 217,000 children suffer from moderate-to-severe acute malnutrition. The agencies warned that this situation is bound to worsen as a result of the 14 August earthquake and its aftermath.

The capacity to receive returning Haitians has been strained and conditions in Haiti continue to be dire, and not conducive to forced returns, they stressed.

US plan to increase refugee resettlement welcomed by UNHCR 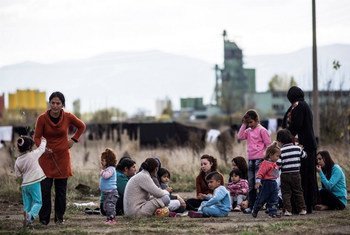 Smugglers will adapt as long as there is a market to exploit, warn UN experts on migrant rights

23 October 2015
Two United Nations experts on the human rights of migrants today called on the European Union to open regular and safe channels for migrants, saying “attempting to seal borders and the over-emphasis on the securitisation of borders is not going to reduce irregular migration in the long run.” 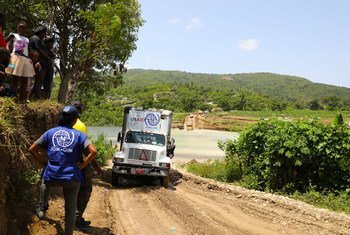 FROM THE FIELD: Haiti’s gruelling post-quake road to recovery

Thousands of Haitians continue to take refuge in neighbours’ houses, makeshift shelters, chapels or informal displacement sites, a month after a devastating 7.2 magnitude earthquake struck the west of the Caribbean island where they live. That’s according to the UN’s International Organization for Migration (IOM) which has been assisting in recovery efforts.