Based on the core belief that “humanity is deeply interconnected” and “we are one”, the new performance piece, "King Clavé" is adding some musical inspiration to this year’s 20th anniversary of the historic Durban Declaration and Programme of Action (DDPA) against racism around the globe.

“Rhythm is at the center of humanity. One who knows rhythm knows the world”, said American percussionist Mickey Hart, best known as one of the two drummers of the Grateful Dead.

He is at the center of the special performance and video feature, along with legendary percussionists Sikiru Adepoju, Zakir Hussain, Giovanni Hidalgo, and a posthumous appearance by the West African drummer Babatunde Olatunji.

Born from a collaboration between Playing For Change and Planet Drum, "King Clavé" is supported by the UN’s sexual and reproductive health agency, UNFPA, to mark the Durban Declaration commemorations, the 1996 document inked in South Africa, that is considered a milestone in the global fight against racism.

The musical production was part of the special opening to the UN General Assembly high-level meeting, which took place on 22 September to commemorate the 20th anniversary, on the theme, Reparations, racial justice and equality for people of African descent.

Set to one of the most referenced and universally used rhythms known as the ‘clavé’, "King Clavé", invokes a skeletal rhythmic figure, around which various drums and percussion are played in most African, Caribbean, South American and New Orleans music, from the southern US.

According to its creators, through the rhythm, “hearts are connected, and differences disappear, illuminating how deeply humanity is interconnected and revealing that we are one”.

The new piece follows on from the unprecedented success of Peace Through Music: A Global Event for Social Justice in 2020, a collaboration between Playing For Change and UNFPA, who decided to continue on their journey, to unite the world through the power of music.

In the middle of the COVID-19 pandemic, Peace Through Music was set as a virtual event and concert to inspire people to act for peace and justice, everywhere for everyone. The global event called for equality, human rights, and an end to discrimination, and reached 4 million views within 48 hours of its exclusive Facebook premiere, connecting and inspiring millions of people in 193 countries.

The history behind the creators

Mickey Hart was one of the more than 200 musicians that made Peace Through Music 2020 possible, who created Planet Drum with tabla virtuoso, Zakir Hussain.

Planet Drum members have a long history with the UN and activism—the late Babatunde Olatunji's drums were displayed during the “Breaking the Silence, Beating the Drum” exhibit in 2009, as part of the commemoration for the International Day of Remembrance of the Victims of Slavery and the Transatlantic Slave Trade, and he had previously performed at the UN General Assembly, and Zakir Hussain performed at the UN for the first International Jazz Day in 2012.

Planet Drum was founded in 1990 with the intention of illustrating how the power of rhythm can connect people from all different cultures and geographical backgrounds.

Musicians then joined Mickey Hart in his studio for a one-week session of improvised rhythmic composition, and took turns creating specific grooves, then passing the rhythm around, with each track representing a different strand of traditional music - finally blending it together.

Playing for Change has been recording and filming musicians and uniting them through “Songs Around the World” for the past 20 years.

The Foundation established 15 music schools celebrating art and culture in under-served communities around the world.

According to Mark Johnson, Playing For Change Co-Founder, “King Clavé is a celebration of rhythm around the world, and with music, we reconnect heart beats through shared humanity.”

Later this year, a long version of the project will be shared. Stay tuned.

UN
Durban+20: The fight for racial equality, past and future
♦ Receive daily updates directly in your inbox - Subscribe here to a topic.
♦ Download the UN News app for your iOS or Android devices. 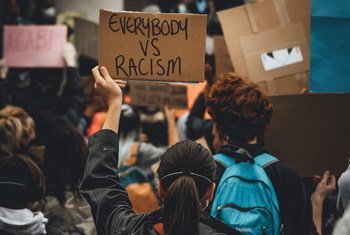 Two decades after a landmark declaration was adopted to eradicate racism, discrimination continues to “permeate institutions, social structures and everyday life in every society”, the UN chief told a high-level meeting on Wednesday.