FAO/Giulio Napolitano
According to the UN, an estimated one-third of all food is lost or wasted worldwide as it moves from where it is produced to where it is eaten.

Not only is preventing food loss and waste crucial for the world’s people, it is also essential for the future of the planet, they stressed in remarks to an online commemorative event.

Reducing food waste is something each &amp; every one of us can do to help:🍜 fight food insecurity🌎 protect precious resources👣 reduce our carbon footprint💰 save money &amp; energy🦸‍ consume more consciouslyDo your part to make #NotWasting a way of life!#FLWDay pic.twitter.com/ziLaDopLgw

“We cannot continue to lose 14 per cent of food produced globally and to waste 17 per cent of total food in households, retailers, restaurants and other food services.  This amounts to a loss of $400 billion a year in food value,” said Qu Dongyu, Director-General of the Food and Agriculture Organization (FAO).

In his video message, Mr. Qu spoke of the need to step-up global cooperation to transform food systems, from farm to fork, in line with the 17 Sustainable Development Goals (SDGs).

Goal 12, on ensuring sustainable production and consumption patterns, includes a specific target to halve per capita global food waste by 2030.

Our food systems and consumption practices, which use up precious water and land resources, are major contributors to the triple crises afflicting the planet: climate change, biodiversity loss and pollution, said Inger Andersen, Executive Director of the UN Environment Programme (UNEP).

“Food security, obviously”, she began.  “Cost savings at all levels. Climate mitigation. A reduced burden of pollution, and reduced use of water and land. Protection for biodiversity by using existing agricultural land more efficiently, and so, reducing the push for expansion is also critical.”

In Africa the value of lost food exceeds the annual value of grain imports, according to Amir Mahmoud Abdulla, Deputy Executive Director at the World Food Programme (WFP).

These losses exacerbate food insecurity and affect the environment through the waste of precious land, water, farming inputs and energy to produce food that is not eventually eaten.

“In fact, current levels of food loss caused more than three billion tonnes of greenhouse gases to be emitted, meaning that if food waste were to be a country it would be the third biggest emitter of carbon emission,” he said in a pre-recorded message.

“This is really important for us all to remember as we head to the UN climate conference COP 26 in Glasgow.”

The event marking the International Day of Awareness on Food Loss and Waste Reduction, was held one week after the UN Food Systems Summit and shortly after countries took stock of progress towards meeting the SDG 12 target.

Achieving it by the 2030 deadline will require collective action, and rapidly, said Gilbert Houngbo, President of the International Fund for Agricultural Development (IFAD).

He outlined priorities for Governments and the private sector, such as integrating food loss reduction into national agricultural policies and development plans, and improving access of smallholder farmers to rural financial services.

“This International Day is one way for us all to come together to promote interventions that reduce food loss and contribute to achieving more sustainable food systems. Together, we can scale up solutions for reducing food loss,” said Mr. Houngbo. 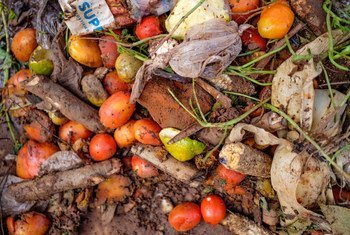 A lack of food, hunger and malnutrition affect every country in the world, the UN said on Tuesday, in an urgent appeal for action to reduce the amount of food that’s wasted.