A decade of war in Syria has left more 350,200 people dead, High Commissioner Michelle Bachelet told the Human Rights Council on Friday, noting that this total was an “under-count of the actual number of killings”.

These are a result of a war that spiralled out of the 2011 uprising against President Bashar al-Assad's rule.

Based on the “rigorous work” of the UN's human rights office (OHCHR), she said that the tally, which includes civilians and combatants, was based on “strict methodology” requiring the deceased’s full name, the date of death, and location of the body.

🔴BREAKINGAt #HRC48, the @UN Human Rights chief reported that more than 350,000 people have been killed in 10 years of conflict in #Syria.Michele Bachelet said this figure was "certainly an undercount of the actual number of killings."STATEMENT ➡️ https://t.co/80pGY0xU2r pic.twitter.com/hHDjuozrUb

People behind the numbers

The Governorate of Aleppo saw the greatest number of documented killings, with 51,731 named individuals.

“Behind each recorded death was a human being, born free and equal, in dignity and rights”, reminded the High Commissioner.

“We must always make victims’ stories visible, both individually and collectively, because the injustice and horror of each of these deaths should compel us to action.”

To provide a more complete picture of the scale and impact of the conflict, the UN agency has also established statistical estimation techniques to account for missing data.

The High Commissioner explained that documenting deaths complements efforts to account for missing people and that her office has been helping the families of the missing, to engage with international human rights mechanisms.

Given the vast number of those missing in Syria, Ms. Bachelet echoed her call for an independent mechanism, with a strong international mandate, to “clarify the fate and whereabouts of missing people; identify human remains; and provide support to relatives”.

No end to the violence

Today, the daily lives of the Syrian people remain “scarred by unimaginable suffering”, the UN human rights chief said, adding that they have endured a decade of conflict, face deepening economic crisis and struggle with the impacts of COVID-19.

Extensive destruction of infrastructure has significantly affected the realization of essential economic and social rights, and there is still no end to the violence.

“It is incumbent upon us all to listen to the voices of Syria's survivors and victims, and to the stories of those who have now fallen silent for ever”, the High Commissioner concluded.

The UN humanitarian affairs chief warned on Wednesday that Syria, after more than a decade of war, remains “caught in a downward spiral” and that “the country will continue to be a place of tragedy, so long as the conflict continues.” 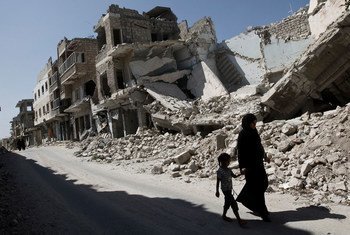 The future for Syria’s people is “increasingly bleak”, UN-appointed rights experts said on Tuesday, highlighting escalating conflict in several areas of the war-ravaged country, a return to siege tactics and popular demonstrations linked to the plummeting economy.