CIFOR/Manuel Lopez
Wild meat is often a key use and a major driver for legal and illegal hunting,

The domestic consumption of meat from wild animals has significant impacts on most species protected under the Convention on the Conservation of Migratory Species of Wild Animals (CMS), says a new report released on Wednesday, including increasing the risk of diseases spreading from animals to humans.

According to the study, 70% of mammal species protected under the CMS are used for wild meat consumption. This has led to drastic declines, and also the extinction of several migratory mammal populations.

The first of its kind report, found that wild meat is often a major driver for legal and illegal hunting, particularly of ungulates – primarily large mammals with hooves - and primates, and especially during times of conflict or famine and in the course of changing land use.

About 67 of the 105 species studied were recorded as hunted. Of these 67 species, the largest intended use (47) was for wild meat consumption. Other purposes were down to cultural tradition, medicinal use, human-wildlife conflict, unintentional take and for sport or trophy hunting.

According to the report, there is strong evidence that zoonotic disease outbreaks are linked to human activities, as is strongly believed by many scientists in the case of the current COVID-19 pandemic.

The taking of wild meat and consumption has been identified as the direct and causative agent for the spill-over into humans for Monkeypox virus, SARS, Sudan Ebola virus and Zaire Ebola virus, with subsequent human-to-human transmission.

In total, 60 zoonotic viral pathogens were reported as hosted by the 105 migratory species studied.

Encroachment into remaining intact habitats through infrastructure and economic activities have made vast new areas accessible for wild meat taking, increasing the risk for humans.

Executive Director of the UN Environment Programme, Inger Andersen, points out that “the COVID-19 pandemic has taught that the overexploitation of nature comes at a heavy cost.”

“We urgently need to depart from business as usual. In so doing, we can save many species from the brink of extinction and protect ourselves from future outbreaks of zoonotic diseases,” she said

Global attention has largely focused on international trade, but the report found that the vast majority of taking of species for wild meat consumption is driven by direct use or domestic trade.

For CMS Executive Secretary, Amy Fraenkel, this report “indicates for the first time a clear and urgent need to focus on domestic use of protected migratory species of wild animals, across their range.”

The study highlights a number of factors fueling the problem.

National legislation and regulations may lack clarity or are outdated, while rules are often poorly enforced. A third issue is civil conflict and land use change; and, fourthly, migratory animals cross countries and regions with a wide variety of differing laws and enforcement approaches. Finally, urbanization and increased sale of wild meat as a luxury product is on the rise.

The study also documents links between hunting and the declining population trends of several species.

Around 77 per cent, or 40 out of 52, of the CMS species that were assessed by IUCN as having decreasing populations, were recorded as threatened by hunting.

For example, all chimpanzee subspecies and three of the four gorilla subspecies reported as significantly threatened by hunting, are also experiencing large population declines. Overall, the report finds that taking or poaching the mammals, has a direct impact on the populations of more than half of the studied species, with high impacts for at least 42 per cent. 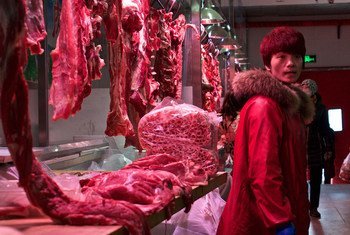 The World Health Organization (WHO) and partners have called for countries to suspend sales of live wild mammals in traditional food markets, also known as “wet markets”, in efforts to prevent the emergence of new deadly diseases, such as COVID-19.