Secretary-General António Guterres described Sima Sami Bahous of Jordan, as “a champion for women and girls”, announcing on Monday her appointment to lead the UN’s gender equality and empowerment entity, UN Women.

The UN chief said she would also champion gender equality and youth empowerment, as well as being a “keen advocate for quality education, poverty alleviation and inclusive governance”.

Ms. Bahous brings to the job more than 35 years of leadership experience at the grassroots, national, regional and international level.

Today, @UN Secretary-General @antonioguterres announced @SimaBahous of Jordan as Executive Director of UN Women. She is a champion for women and girls, gender equality and youth empowerment. Join us in wishing her a warm welcome. https://t.co/6dd40d8m1Q pic.twitter.com/1RDZjRa3XY

She has expertise in advancing women’s empowerment and rights, addressing discrimination and violence, and promoting sustainable socio-economic development, in line with the Sustainable Development Goals (SDGs) the UN chief said in a statement.

The news came following consultations with Member States and the Executive Board of UN Women.

Prior to that, she was the Assistant Administrator and Director of the Regional Bureau for Arab States at the UN Development Programme (UNDP) from 2012 to 2016 and Assistant Secretary-General and Head of the Social Development Sector at the League of Arab States, from 2008 to 2012.

The new UN Women chief has also served in two ministerial posts in Jordan as President of the Higher Media Council from 2005 to 2008 and as Adviser to King Abdullah II from 2003 to 2005.

She has also worked for UN Children’s Fund UNICEF, and with a number of UN and civil society organizations, as well as teaching development and communication studies at different universities in her native Jordan.

She is fluent in Arabic and English, and proficient in French.

The UN chief said he was “deeply grateful” to outgoing Executive Director Phumzile Mlambo-Ngcuka of South Africa, for the “commitment and dedicated service” she exhibited as head of UN Women.

He also extended his appreciation to the UN Special Representative on Sexual Violence in Conflict, Pramila Patten, who will continue to serve as Acting Executive Director until Ms. Bahous is in post.

IAEA strikes deal with Iran on monitoring of nuclear programme 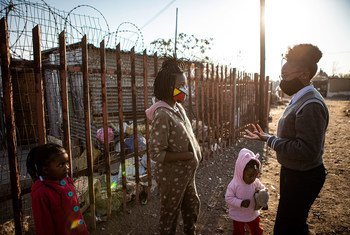 Failure to address domestic violence in South Africa is a violation of women’s rights, independent UN experts said in a report published on Monday, citing low levels of prosecution and conviction as factors.