UNMISS
South Sudan remains one of the least developed countries in the world.

The UN World Food Programme (WFP) said on Monday that beginning next month, funding shortages will force it to suspend lifesaving food assistance for more than 100,000 displaced people in parts of South Sudan until the start of 2022.

“Drastic times call for drastic measures. We are forced to take these painful decisions and stretch our limited resources to meet the critical needs of people who were on the brink of starvation and now risk slipping back into catastrophe, if their access to food diminishes”, said Matthew Hollingworth, Representative and Country Director of WFP in South Sudan.

While generous contributions from donors have enabled WFP to assist millions, many vulnerable people in crisis areas continue to suffer from the highest levels of food insecurity and cannot survive without sustained food assistance.

Starting in October, 106,000 people displaced in camps in Wau, Juba and Bor South, will not receive monthly food rations for the rest of the year.

For the next four months, WFP requires an additional $154 million to provide sufficient quantities of food assistance.

“If funding levels continue to drop, we may have no choice but to make further cuts as the needs of vulnerable communities continue to outpace available resources”, said Mr. Hollingworth.

Over the last few years food insecurity has continued to increase, currently affecting more than 60 per cent of South Sudan, according to WFP.

The three-month suspension is part of a broader food assistance reduction across all camps that was announced in April, whereby 700,000 refugees and internally displaced people currently receive only half the caloric contents of a WFP food ration.

Prior to implementing the cuts, WFP and partners ran a campaign to prepare those communities affected.

The world’s youngest nation has been mired in instability and conflict since gaining independence from Sudan 10 years ago.

In 2018 President Salva Kiir and former Vice-President and long-time political rival Riek Machar, signed a peace accord hoping to end the crisis and improve the lives and safety of millions of South Sudanese.

During a four day visit which ended on Sunday, to increase momentum in executing the peace agreement, UN peacekeeping chief Jean-Pierre Lacroix, reiterated to the UN-run Radio Miraya network, that all parties must work together to demonstrate political will for a durable peace.

“We are committed to supporting the current efforts towards peace and stability in South Sudan”, he said. “We will be backing every positive step that is taken, and we believe that achieving the ultimate objective of peace and stability requires a very strong and trustworthy partnership between the Government and international partners”.

Ongoing conflict and the worst flooding in 60 years have left more than eight million people in need of assistance.

Humanitarians say food insecurity this year is the worst in a decade with 7.2 million people severely acutely food insecure. There has been three years of unprecedented flooding. Last year’s floods were the worst for 60 years, affecting 480,000 people.

“We are also seeing subnational conflict across the whole country at a time when, actually, we want to see the political gains that have happened since the unity government came into place last year strengthened”, said WFP’s Mr. Hollingworth.

Mr. Lacroix underscored the need for civil society and media to operate in safety, particularly during the lead-up to elections.

“It’s very simple”, he said. “The UN stands for freedom of expression. We stand for wide open civic space”.

The Under-Secretary-General also reiterated the importance of meeting the peace deal target for at least 35 per cent representation of women across all governance structures, saying their role and empowerment is “absolutely critical to achieving peace”.

While acknowledging the difficulty of the situation in the country, Mr. Lacroix. assured that the UN’s commitment is “very, very strong”.

“We will continue, to do our best to help support the South Sudanese people moving forward”, he concluded.

UNMISS/Francesca Mold
The UN Under-Secretary-General for Peace Operations, Jean-Pierre Lacroix inspects a guard of honour provided by Chinese peacekeepers in Juba, South Sudan.
♦ Receive daily updates directly in your inbox - Subscribe here to a topic.
♦ Download the UN News app for your iOS or Android devices. 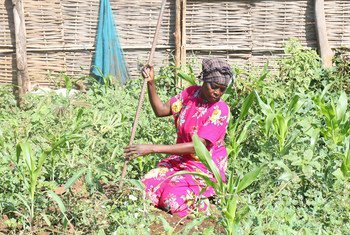 Finding solutions based on peace and development is crucial for the future of the nearly seven million forcibly displaced people from Sudan and South Sudan, the UN High Commissioner for Refugees, Filippo Grandi, said following a three-day visit to the two countries. 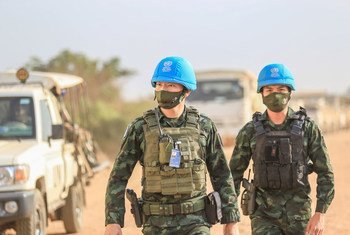 Blue helmets from Thailand working with the UN Mission in South Sudan (UNMISS) are not only doing their bit to repair and rehabilitate critical infrastructure but are also helping support the mission’s COVID-19 response and training local communities about growing their own food.