UNOCHA/Charlotte Cans
The Faj Attan neighbourhood in Yemen is regularly hit by airstrikes. Most of the population has left.

There has been no let-up in more than six years of conflict in Yemen, as a growing “climate of fear” among civilians continues, a panel of UN-appointed independent rights experts said on Wednesday.

"We urge the parties and the international community to establish a credible political process to achieve peace in #Yemen"- Kamel Jendoubi, chair of the @UN Group of Experts on Yemen presenting its new report on "a nation abandoned"READ➡️https://t.co/xITiG96sys#YemenCantWait pic.twitter.com/9kJCdRIzCJ

In a new report commissioned by the Human Rights Council into how the war has been waged over the last 12 months, the panel condemned the same “egregious” violations that have characterized their previous findings.

These include airstrikes by the Saudi-led international coalition that supports the Yemeni Government, and “indiscriminate” shelling of civilians, “particularly by the Houthis but also by the Government of Yemen and the Coalition”.

The country has been divided since 2015 between Government forces backed by the military coalition, and the Houthi rebel group - also known formally as the Ansar Allah movement - who hold most of the north, including the capital, Sana’a.

In the document, entitled: A nation abandoned: A call to humanity to end Yemen’s suffering, the Group of Eminent Experts also cited the Southern Transitional Council as being responsible for specific violations, adding that its power-sharing deal with the Government of Yemen, based in the southern city of Aden, “remains largely dysfunctional”.

The report stressed that all parties to the conflict were responsible for violations, many of which may amount to international crimes.

© UNICEF/Alessio Romenzi
Children sit in front of a house damaged by an air strike, inside the old city of Sana'a, Yemen. (file)

The report also highlights how intense hostilities have been on the Ma’rib front in the past 12 months and in many other locations.

The Group expressed regret that the coalition appears not to take their findings and recommendations on the conduct of its military operations seriously.

These include the principles of distinction, proportionality and precautions in attack to protect civilians and civilian objects.

“The climate of fear, lawlessness and impunity for all those living in Yemen has worsened further despite political agreements and high-level discussions between key actors”, said Kamel Jendoubi, the Chairperson of the Group of Eminent Experts.

Life ‘unbearable for many’

The UN-appointed panel of independent experts warned that everyday life in Yemen is now “unbearable for many”, as, in addition to the conflict, people have to contend with disease outbreaks, the COVID-19 pandemic, flooding, import restrictions, an economic and fuel crisis, and limited humanitarian aid.

“In the midst of the current intolerable situation, only genuine political will on the part of the parties to the conflict and their backers, but also on the part of the international community, can end Yemen’s suffering,” Mr. Jendoubi said.

© WFP/Hussam Al-Sharmani
A woman walks in Taiz, a war-ravaged city in Yemen, split by a frontline.

The Group of Eminent Experts urged a full cessation of hostilities and an end to the supply of arms to Yemen by third parties.

“Given the horrific toll the war continues to take on the people of Yemen, it does not stand to reason, that third States continue to supply the parties to the conflict with the tools of war. The flow of arms must stop now,” chairperson Kamel Jendoubi stated.

The experts also stressed perpetrators must be held accountable for the violations committed. The report highlights steps that can be taken, including making the peace process more inclusive and encouraging a commitment to accountability in peace talks.

Space needs to be created for discussions on transitional justice, prioritising consultations with victims; and putting in place initiatives to strengthen the capacity of Yemeni civil society. “It is now clear that no peace, let alone a sustainable and inclusive one, can be achieved in the absence of political will and a strong commitment for accountability,” Mr. Jendoubi added.

The report urged the Council to ensure that the situation of human rights in Yemen remains on its agenda by renewing the Group’s mandate beyond one year; and by ensuring that the necessary human and financial resources are provided.

The experts reiterated that the Security Council should integrate the human rights dimensions of the conflict in Yemen more fully into its agenda and ensure that there is no impunity for the most serious crimes.

This includes referring the situation in Yemen to the International Criminal Court (ICC) and expanding the list of persons subject to Security Council sanctions. The Group of Experts are Kamel Jendoubi (Tunisia) - Chairperson, Melissa Parke (Australia), and Ardi Imseis (Canada).

Make mental health a priority across the board, UN chief urges 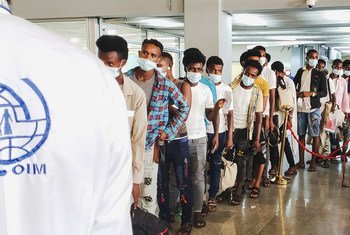 Amid intensifying conflict in Yemen, and the COVID-19 pandemic, the International Organization for Migration (IOM) is helping nearly 5,000 Ethiopian migrants stranded in the country to return home, the UN agency reported on Tuesday. 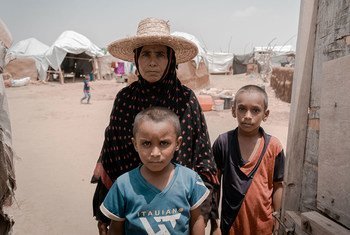 Humanitarian needs, including a lack of shelter, are soaring among displaced communities, as fighting continues in Yemen’s Marib governorate, the UN Refugee Agency (UNHCR) warned on Tuesday.