The flights evacuating civilians from Afghanistan may have come to an end, but a deepening humanitarian crisis remains, UN Secretary-General António Guterres declared on Tuesday, as several senior UN officials restated their commitment to stay and deliver urgently needed supplies to the millions in the country who need humanitarian aid to survive.

In a statement released on Tuesday, Mr. Guterres expressed his deep concern at the deepening humanitarian and economic crisis in the country and the threat of a total collapse in basic services. “Now more than ever”, said Mr. Guterres, “Afghan children, women and men need the support and solidarity of the international community”.

Afghanistan is coping with a severe drought, and its citizens will have to face harsh winter conditions, underlining the need for supplies to be urgently sent to the country, said Mr. Guterres.

Given this precarious outlook, the UN chief called on all parties to facilitate safe and unimpeded humanitarian access for life-saving and life-sustaining supplies, supplies, as well as for all humanitarian workers, pointedly noting that this meant both men and women working in the field.

Spokesperson Jens Laerke from the UN humanitarian affairs office (OCHA) said on Tuesday that operations were continuing, and that the UN had already helped eight million people this year alone.

UNHCR and partners are committed to staying and delivering assistance and support to the Afghan people, so long as it is safe to do so.Now more than ever, the international community must stand together in solidarity. pic.twitter.com/A9nuO72hGb

But he warned that the $1.3 billion funding requirement had not been met and that there was a lack of supplies in the now Taliban-controlled nation.

The World Health Organization (WHO) also warned that despite Monday’s air delivery of 12.5 metric tonnes of medical supplies that will cover the basic health needs of more than 200,000 people, it was still “not enough”.

She warned that before the Taliban takeover, some 12.2 million people were already projected to experience food insecurity and malnutrition; getting supplies into Afghanistan was “absolutely critical”, she said.

Also briefing journalists in Geneva on Tuesday, the UN refugee agency, UNHCR, repeated its call to neighbouring States to keep their borders open to those fleeing Afghanistan.

Around 3.5 million people are displaced within the county and many of those wishing to cross into countries such as Pakistan or Iran may not have the documents they need, said UNHCR spokesperson, Andrej Mahecic, who stated that while many of those crossing into Pakistan had not “expressed a clear intention to seek asylum” to border monitors, they “nevertheless have international protection needs” and “may not be able to cross without passports and visa documentation.

“Hence our call on the countries neighbouring Afghanistan to keep their borders open and allow those who may be at risk to seek safety.”

The UNHCR spokesperson commended Pakistan for having hosted Afghan refugees for decades, with 1.4 million registered there. He added that whilst he was aware of the pressures this poses, UNHCR remained ready to help national authorities to scale up the response to humanitarian needs.

Alarming reports of human rights violations against civilians in Afghanistan have led to repeated calls since the Taliban takeover of the country two weeks ago, for the fundamentalist group and other parties to respect and protect the human rights of all Afghans, including boys and girls.

With at least 45 per cent of the Afghan population below the age of 15, two top UN experts urged the international community not to abandon the children of Afghanistan: “Ensuring the protection of children from harm and including their voices and needs is critical to sustainable peace and development in Afghanistan,” said Virginia Gamba, Special Representative for children caught up in armed conflict,  and Najat Maalla M’jid, Special Representative tackling violence against children.

They said they were particularly concerned about the rights of girls, including sexual and gender-based violence as well as their right to education.

They further urged the Taliban to ensure the respect and protection of humanitarian aid and personnel, as over 10 million children across Afghanistan are in need of humanitarian assistance to survive, according to the United Nations on the ground. “The children of Afghanistan have suffered enough,” they said.

The head of UN Women, Pramila Patten, called on the Taliban to include women in whatever form of government it eventually decides upon, in a statement released on Tuesday.

Ms. Patten referred to a commitment, made by a spokesperson of Afghanistan’s de facto rulers, to uphold women’s rights “within the framework of Islam”, and said that including women in government would be the “ultimate litmus test for the Taliban”.

The 2004 Afghan constitution, said Ms. Patten, called for women’s participation in the political life of the country, and in 2015 the country adopted a National Action Plan on Women, Peace and Security based on a UN resolution. Ms. Patten insisted that these commitments are binding and must be acted upon immediately.

“Afghan women’s rights activists have fought for their rights and have made considerable progress”, continued Ms. Patten. “These hard-won gains cannot be reversed or rolled back”. 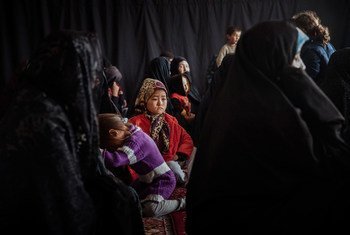 The UN Security Council passed a resolution on Monday that calls for the Taliban to facilitate safe passage for people wanting to leave Afghanistan, allow humanitarians to access the country, and uphold human rights, including for women and children. 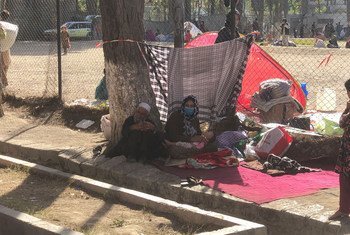 Lifesaving medical supplies reached Afghanistan by air on Monday, the first UN shipment to arrive since the Taliban takeover more than a week ago, as UN human rights experts called on the country's new rulers to live up to their promise to fully protect the rights of women and girls in the country.