© UNICEF Afghanistan
A mother and her children fled conflict in Lashkargah and now live in a displaced persons camp in Kandahar, southern Afghanistan.

Negotiations are underway to bring 500 metric tonnes of urgently needed medical supplies into Afghanistan, senior regional officials with the World Health Organization (WHO) said during an online briefing on Tuesday.

The items, which are stuck in Dubai, were due to enter the country this week but have been delayed as commercial flights are not being allowed into the international airport in the capital, Kabul.

"My message to the people of #Afghanistan: we stand in solidarity with you, and we place your lives, health and well-being as our top priority” Highlights from the opening remarks by @WHOEMRO Regional Director Dr Ahmed Al-Mandhari, at the media briefing on Afghanistan today⬇️ pic.twitter.com/fAjSgoeeyj

Dr. Richard Brennan, WHO Regional Emergency Director based in Cairo, said the agency is exploring options, and hopes to have “some more encouraging details” in the coming days. “We are in negotiations with the Governments of three or four countries,” he told journalists, adding that he was not at liberty to name them.

“I think we will be able to secure flights to bring the supplies in, and in all likelihood into Kabul airport. And then of course there is the somewhat complex logistical operation of unloading the planes, making sure that trucks can come into the airport securely and safely, and depart safely and securely.”

WHO, which has been in Afghanistan for seven decades, underlined its commitment to stay in the country, and to build on progress over the past 20 years, including in reducing maternal mortality and child mortality.  However, its medical supplies are running low.

“Usually in every country we have emergency stock,” said Dr. Rana Hajjeh, Director of Programme Management at the Regional Office, speaking through an interpreter.

“In the current situation, we launched or released about 70 per cent of the emergency stock that we do have in the country. This stock would only be enough for one week, so we would need all kits, medical supplies, equipment more than ever.”

WHO recently conducted assessments to review the health situation on the ground. While most major health facilities are functional and accessible, across the country they are experiencing critical supply shortages, according to Dr. Dapeng Luo, the agency’s Representative in Afghanistan.

Dr. Luo underlined the urgent need for reproductive health services, mental health services, hygiene kits for newly displaced people, and nutritional supplements for children. “Our assessment reveals that service delivery is being supported by the Taliban health authorities without any pressure on health staff,” he said, speaking from Kabul.

Some female health workers have resigned from their positions due to the ongoing insecurity situation -- Dr. Dapeng Luo, WHO Representative in Afghanistan

Afghanistan has also experienced what Dr. Luo described as three substantial waves of COVID-19 infections, and WHO fears the current upheaval and displacement could spark an increase.

Nearly 160,000 cases of the disease, and more than 7,000 deaths, had been recorded as of Monday. Insecurity has also caused COVID-19 testing rates to decline, with a nearly 80 per cent drop last week when compared to the previous week.

With less than five per cent of Afghans vaccinated, roughly two million people, WHO and partners are working to scale up surveillance, testing and vaccination among displaced populations.

Meanwhile, Afghanistan and Pakistan remain the only countries which have not eradicated wild poliovirus. Dr. Ahmed Al-Mandhari, WHO Regional Director for the Eastern Mediterranean, underlined the need to act now, as there was one case in each country for the year so far.

“As the current events continue to unfold, WHO is fully committed to staying and delivering in Afghanistan,” he said, speaking on behalf of the agency’s nearly 700-strong staff, who are working in all 34 provinces. 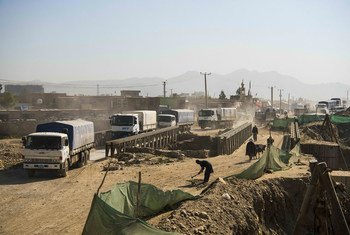 UN rights chief Michelle Bachelet led calls on Tuesday for Afghanistan’s new Taliban leaders to respect the rights of all Afghans and warned that the treatment of women and girls is a “fundamental red line” that should not be crossed.