© UNICEF Afghanistan
An Afghan girl was injured when a school in Kabul’s district 13 came under attack.

Protection for children caught up in war must be at the heart of the international agenda, including COVID-19 response, a senior UN official said on Monday.

Virginia Gamba, the Secretary-General’s Special Representative for Children and Armed Conflict, made the appeal in presenting her annual report to the UN General Assembly, which covers the period from August 2020 to July 2021.

📄Annual Report of the SRSG-CAAC to the General Assembly issued today!🔴As the CAAC mandate turns 25 it is more urgent than ever to put the protection of conflict-affected children at the heart of the international agenda👉Read more here https://t.co/GMIMEaJEE1#ACTtoProtect pic.twitter.com/8XZttCt3oE

The report outlines large scales of grave violations against children, with the most prevalent being recruitment and use in hostilities, killing, maiming, and denial of humanitarian access.

Overall, 8,521 children were recruited or used by parties to conflict, mainly in the Democratic Republic of the Congo, Somalia, Syria and Myanmar.  Meanwhile. some 8,400 youngsters were killed or maimed, with Afghanistan, Syria, Yemen and Somalia remaining the deadliest conflicts for children.

The ongoing killing and maiming of children by landmines, improvised explosive devices (IEDs) and other explosive weapons and remnants of war, remains a particular concern, according to the report.

“Member States must sign and implement existing international legal instruments pertaining to these weapons and promote mine clearance and mine risk education,” said Ms. Gamba.

“More broadly, they must adopt and implement legislation criminalizing all violations against children as well as enhance accountability to end cultures of impunity and ultimately prevent the future occurrence of such crimes,” she added.

The report found that the closure of schools and child-friendly spaces due to the pandemic, and loss of household incomes, has increased children’s risk of being recruited and used, sexually abused, exploited and forcibly married.

“Conflict-affected children have been the most affected by the pandemic, hence their needs must be at the centre of any COVID-19 recovery plan,” she said.

“Child protection activities and services must be considered as lifesaving and in this regard, I call on Member States to continue to provide political support and substantial funding to ensure their continuity,” she stressed.

Despite pandemic restrictions, Ms. Gamba continued to engage with parties to conflict during the reporting period, albeit virtually, and to provide support to UN child protection staff on the ground.

The result has been at least 35 new commitments signed or adopted by warring parties last year alone, such as command orders, updated workplans, and mitigation measures during military operations.

Furthermore, ongoing engagement with countries, UN entities, and international, regional and sub-regional organizations, among others, helped to amplify advocacy efforts to end grave violations against children.

For example, Ms. Gamba and her Office continued to spearhead the Global Coalition for Reintegration of Child Soldiers, a 2018 initiative launched alongside the UN Children’s Fund, UNICEF, which published three briefing papers last year.

This latest report to the General Assembly was issued as the UN mandate on Children and Armed Conflict turns 25, thus highlighting the urgent need to prioritize protection for youngsters caught in war.

It points to areas for enhanced action, such as including dedicated child protection provisions and capacities in relevant mandates for UN field operations, namely peacekeeping and special political missions.

Ms. Gamba also highlighted priorities to strengthen the mandate’s impact, including data analysis and management for early identification of, and response to, grave violations.

“The 25th anniversary of the Children and Armed Conflict mandate must be seen as an opportunity for Member States to renew their commitment to protect boys and girls from hostilities and to effectively translate their promise into action, including by joining the ‘Act to protect children affected by conflict’ campaign,” she said. 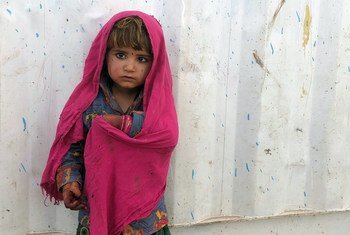 UN humanitarian agencies are warning that they are unable to bring urgently needed emergency supplies into Afghanistan, and are calling for a “humanitarian airbridge” to be set up immediately, to allow the unimpeded delivery of medicines and other aid supplies to the country.