© UNICEF/George Harry Rouzie
A man is moved to a temporary bed while awaiting medical attention at a hospital in Les Cayes following the earthquake that struck Haiti on 14 August.

UN Secretary-General António Guterres on Tuesday urged countries to step up support to Haiti as the country recovers from a deadly earthquake under the clouds of a tropical storm.

The 7.2 magnitude quake struck southwestern Haiti on Saturday morning, killing more than 1,300 people. Thousands of homes, as well as hospitals, schools, churches, bridges and roads, were either damaged or destroyed.

A UN team on the ground is working with the authorities to help ensure humanitarian aid and personnel can reach people in need.

“As assessments reveal the level of suffering, the scale of humanitarian need in Haiti continues to grow,” Mr. Guterres said in a statement.  “I call on all Member States to mobilize efforts to support Haiti in averting a humanitarian disaster.”

He reported that relief convoys reached affected communities in Les Cayes, Jérémie and Nippes on Tuesday, while UN Disaster and Assessment Coordination teams are on their way to the country.

© UNICEF/George Harry Rouzie
A hotel in Gele was destroyed after a 7.2 magnitude earthquake struck Haiti on 14 August.

The UN has also allocated $8 million from its Central Emergency Response Fund (CERF), which will be used to provide essential health care, clean water, emergency shelter and sanitation.

“We will continue to scale up our response to the hardest-hit areas even as Tropical Storm Grace approaches Haiti with its threat of heavy rainfall and flash floods,” he said.

Mr. Guterres underlined the UN’s solidarity with the Caribbean nation.

“I have a message to the people of Haiti: you are not alone,” he said.  “We will stand by your side and support you every step of the way out of this crisis.”

Half a million children affected: UNICEF

Meanwhile, the UN Children’s Fund, UNICEF, is working closely with the Haitian Government and partners to conduct rapid assessments of children’s needs.

The agency estimates that overall, 1.2 million people, including 504,000 children, were affected by the earthquake.

With the tropical depression already drenching some of the hardest hit areas, UNICEF feared flooding and mudslides will worsen the situation of vulnerable families and further complicate humanitarian response.

“Countless Haitian families who have lost everything due to the earthquake are now living literally with their feet in the water due to the flooding.”

Humanitarian response is also being hampered by criminal violence and insecurity.  UNICEF reported that gangs control the main road from the capital, Port-au-Prince.

Despite this challenge, the agency reached affected areas with medical supplies within hours of the earthquake. Additionally, a UNICEF truck has delivered six medical kits to three hospitals in Les Cayes, containing enough supplies – including gloves, painkillers, antibiotics and syringes – to treat 30,000 people over three months.

UNICEF and partners are also distributing tarpaulins for emergency shelter, and other items such as latrines and showers, water reservoirs, hygiene kits, water treatment tablets and jerrycans.

Although assessments are underway, UNICEF estimates that it will need $15 million to meet the most urgent needs of at least 385,000 people, including 167,000 children under the age of five, for a period of eight weeks.

The figure will be reviewed and adjusted as the impact on children and families becomes clearer. 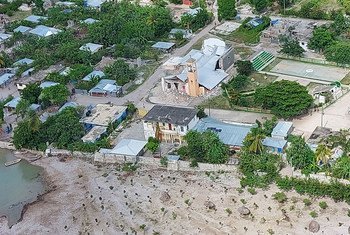 As Haiti struggles to recover from the devastating 7.2 magnitude earthquake that hit over the weekend, killing some 1,300 people, the UN is warning that many people are likely to be affected by Tropical Depression Grace, a storm which is expected to bring torrential rain, flooding and mudslides between Monday and Tuesday. 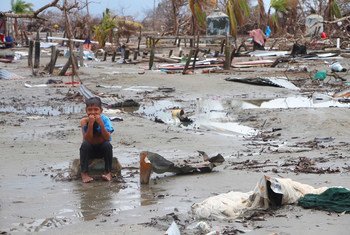 Climate-related and geophysical events resulted in the loss of 312,000 lives and directly affected more than 277 million people in Latin America and the Caribbean, a new report released by the World Meteorological Organization (WMO) revealed on Tuesday.