© UNICEF/Gema Espinoza Delgado
Communities in Nicaragua were devastated after Hurricane Iota hit the country in November 2020.

Climate-related and geophysical events resulted in the loss of 312,000 lives and directly affected more than 277 million people in Latin America and the Caribbean, a new report released by the World Meteorological Organization (WMO) revealed on Tuesday.

Extreme weather and climate change are threatening the entire region, “from the heights of Andean peaks to low-lying islands and mighty river basins”, the study, “State of the Climate in Latin America and the Caribbean 2020”, states.

Increasing temperatures, changing rainfall patterns, storms and retreating glaciers have all had a profound impact on human health and safety, food, water, energy security and the environment.

“Latin America and the Caribbean (LAC) is among the regions most challenged by extreme hydro-meteorological events,” WMO Secretary-General Professor Petteri Taalas said in a statement to mark the release of the document.

World Bank/Stephan Bachenheimer
The Chacaltaya mountain area of Bolivia, was once a ski resort but glaciers have melted away over the last decades. (file)

Mr Taalas noted the impacts include “water and energy-related shortages, agricultural losses, displacement and compromised health and safety, all compounding challenges from the COVID-19 pandemic.”

Concerns about fires and the loss of forests are also raised in the document. Almost half of the area of the LAC region is covered by forests, representing about 57 per cent of the world’s remaining primary forests and storing an estimated 104 gigatons of carbon.

“Fires and deforestation are now threatening one of the world’s largest carbon sinks, with far-reaching and long-lasting repercussions,” the WMO Secretary-General added.

© UNICEF/Moreno Gonza
Fifteen-year-old Benson Etienne and his family escaped before their house collapsed in the hurricane-hit Marsh Harbour, in Abaco Island, Bahamas.

2020 was among the three warmest years in Central America and the Caribbean, and the second warmest year in South America. Maximum temperatures at some stations showed record-breaking values with temperatures up to 10 °C above normal.

Widespread drought across Latin America and the Caribbean had significant impacts, including lowering rivers level, the report notes, which have hampered inland shipping routes, reduced crop yields and food production, leading to worsening food insecurity in many areas.

Forest loss is an important contributor to climate change due to carbon dioxide release, the study warns: between 2000 and 2016, nearly 55 million hectares of forest were lost, constituting more than 91% of forest losses worldwide.

The increased rate of wildfires in 2020 caused irreversible damages to ecosystems, including adverse impacts to vital ecosystem services and livelihoods dependent on them. While it is still a net carbon sink, the Amazon teeters on the edge of becoming a net source if forest loss continues at current rates.

US Coast Guard Southeast
US Coast Guard Air Station Clearwater, Florida, responds to the devastation in the aftermath of Hurricane Dorian in the Bahamas. (2 September 2019)

In 2020 the Caribbean sea surface temperature hit a record high, and the report shows how marine life, coastal ecosystems and the human communities that depend on them are facing increasing threats from ocean acidification and heat and rising sea levels.

In Latin America and the Caribbean more than 27% of the population live in coastal areas, with an estimated 6–8% living in areas that are at high or very high risk of being affected by coastal hazards
Glaciers have been retreating during the last decades, and ice mass loss has been accelerated since 2010, in line with an increase in seasonal and annual temperatures and a significant reduction in annual precipitation in the region.

Greater political commitment and more financial support to strengthen early warning systems and operational weather, climate and hydrological services, are identified in the report, as ways to support risk management and adaptation.

Early warning systems can reduce disaster risk and disaster impacts, but the WMO study warns that they are underdeveloped in LAC region, particularly in Central and South America.

Mangroves are singled out as an exceptional resource for adaptation and mitigation, with the capacity to store three to four times more carbon than most of the forests on the planet.

However, the mangrove area in the region declined 20 percent between 2001-2018. The conservation and restoration of existing “blue carbon” ecosystems such as mangroves, seagrass beds, and salt marshes is identified an important opportunity to mitigate and adapt to global warming.

State of the Climate in Latin America and the Caribbean 2020 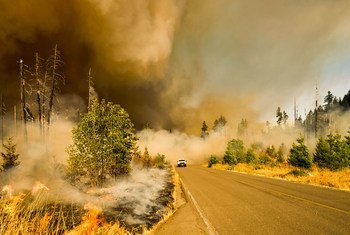